Carl's Drive-In — and all the things that make it great — are here to stay. ANDY PAULISSEN
click to enlarge 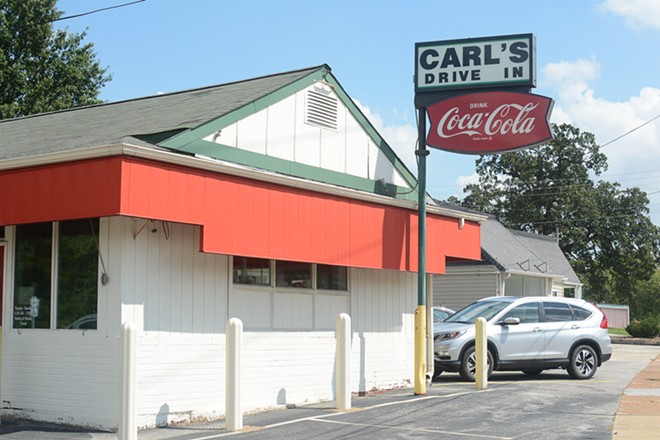 ANDY PAULISSEN
Carl's Drive-In — and all the things that make it great — are here to stay.
St. Louis Standards is a weekly column dedicated to the people, places and dishes that make our food scene what it is.


If fans of the longtime Brentwood burger institution Carl's Drive-In have any worries about the restaurant being sold, they need only look to David Kraemer's first official act as its new owner.

"We're going back to Frank's recipe for the grilled onions," Kraemer says. "If you asked for grilled onions anytime in the past six years, you would've gotten sautéed onions browned on the grill. However, the way they used to do it — and it's so good it's a game-changer — is that they used to smash diced onions into the burger, then flip it. So when it cooked, the flavor really got in there. When it's cooked right like that, it's amazing. Apparently they got a lot of blowback when the old owner took that away because he didn't like them like that, so we know that everyone will be excited. We're taking things as far back as they will go and as original as original gets."

Though Kraemer has only owned Carl's Drive-In for a few weeks, he already understands the responsibility that comes with the purchase of such a storied restaurant. That historical weight is something he felt long before he ever considered buying it; in fact, it was the main reason he wanted to own the diner in the first place. Having grown up in Wildwood, Kraemer had only gone to Carl's a handful of times until about six years ago, when he moved to Kirkwood and started patronizing the place three or four times a week. As he became a regular, he got to know the story of the place — how it was built as an automobile service station in 1918, became a hot-dog stand in the early 1940s, was established by Carl Meyer as Carl's Drive-in in 1959 and had a good run under its second owner, Frank Cunetto, from 1986 through 2015. 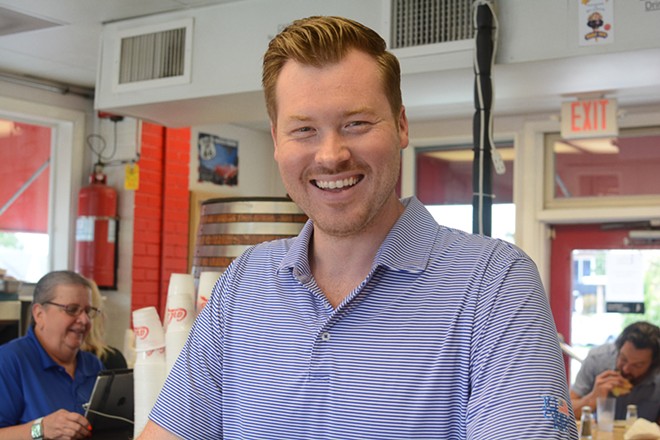 However, it wasn't just the facts of the history that moved him; it was seeing how the diner's story lived in the hearts of the generations of regular guests who see it as more than a place to grab a cheeseburger and fries.

"What's great is the generations of people from Brentwood who come here," Kraemer says. "There are kids who come up riding their bikes and old-timers too. Some of the old guys come in talking about when Carl was here, and that was 62 years ago. There's just so much history here."

In his time coming to the restaurant as a patron and now as an owner, Kraemer has pieced together parts of that history. Some of it involves stories of Meyer, the original owner, who came to the place because his family delivered meat to its original culinary iteration as a hot-dog stand. Under his tenure, he turned the spot from carhop and pickup window service to an enclosed, air-conditioned space with seating for sixteen patrons and, most notably, obtained the restaurant's famous root beer recipe. According to Kraemer, rumor has it the recipe is an original 1904 World's Fair formula that became so popular at Carl's that people associated with Dr. Pepper sent in scientists undercover to create knockoffs of the beverage.

ANDY PAULISSEN
It's never too early to become a Carl's regular.

Most of what Kraemer has come to know, however, centers around the drive-in's second owner, Cunetto, a larger-than-life personality who cultivated the restaurant's reputation as the quintessential nostalgic burger joint. More than just an owner, Cunetto was an ever-present figure at Carl's, flipping burgers from open to close and making the diner's famous root beer himself. Because he was always there, he got to know everyone who came in as if they were family; when he sold the restaurant to longtime customer Mike Franklin in 2015, that legacy continued thanks to veteran employees Kelly, Pam and Lisa, who have each worked at Carl's for more than two decades.

"Those gals pour their hearts and souls into this place," Kraemer says. "They've been running it for years and really keep it alive — collectively, they have been there longer than the business has been around. They've watched so many people who come in here grow up and now bring in their kids, and they know all of their orders. They really put a lot of dedication into knowing you. The place wouldn't be anything without them."

With Kelly, Pam and Lisa by his side, Kraemer hopes that he can continue that legacy, and he is adamant that he has no desire to change what makes Carl's so special. With a background in the homebuilding and contracting business, Kramer plans on doing a remodel of the space — not a full-gut rehab by any means, but a project he describes as a "facelift" of the interior and exterior. His hope is that the work will be more about restoring the restaurant to its past glory than modernizing it, and, to that end, he says he is insistent on keeping the old charm and feel of the space.

ANDY PAULISSEN
The magic of burgers and root beer live on at Carl's Drive-In.

One noticeable change he plans on instituting, however, is opening up on Sundays, something customers have been begging to happen for decades. Though he's still working out the details, he hopes to launch the new hours once the work to the building is done as a way to reintroduce the restaurant to the community that has made it what it is — one that he is thrilled to now be a part of in this new capacity.

"We're not open on Mondays, so I was sitting there one Monday and just looking around thinking how crazy it is that I own this special place," Kraemer says. "I'm still pinching myself. I've already had someone ask to buy it for more than I paid for it. If it was about the money, I would have taken it, but this is not about the money."