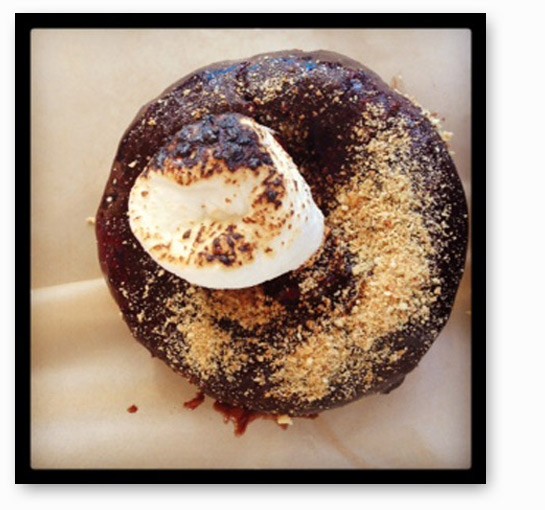 The long-awaited, much-delayed Strange Donuts (2709 Sutton Boulevard, Maplewood; 314-932-5851) will open (for real this time) on Friday, October 11. The artisan doughnut shop has been raising its profile over the past few months with savvy social-media usage, catering for special events and even making deliveries to keep people interested while its opening date was repeatedly pushed back.

"We wanted to build a doughnut shop that we would want to go to," co-owner Cory Smale told Gut Check when we visited the shop this morning, as the delicious scent of baking doughnuts wafted through the air.

As we were speaking to him, a co-worker interrupted Smale and handed him a chocolate cake doughnut with something sticking out of the top -- a marshmallow.

"It's a s'mores doughnut. We just got the blow torch," he said. "This is actually the first time I've tasted this one."

A few bites later, he heartily approved the creation (so do we). The s'more will be one of the six "strange" doughnuts available Friday morning, along with creations like gooey-butter cake and six "classic" doughnuts.

The doors open at 6 a.m. on Friday -- two hours earlier than its line-around-the-block gooey-butter doughnut release back in early September.

"I didn't think people would come at eight, so I thought, let's make it six. Let's see who's for real. I'm hoping we can get some people up at four," Smale laughs. "That'll be fun. Then we'll take a nap."

Social-media marketing has generated a ton of buzz around Strange Donuts over the past few months, and although Smale says the delays weren't anticipated, social media really helped see them through.

"We've met so many people through Twitter who five, ten years ago wouldn't have known we were even doing this," he says. "We raised $12,000 through Kickstarter. We wouldn't have been able to do that without technology, either."

Inside the shop, the blue logo covers walls and even the floor, and a wooden wall sculpture to adds an interesting structural element to the space. The menu is bare-bones (doughnuts, coffee, milk), and that's the way Smale likes it.

"I call it our skating-rink menu. It's an homage to classic donuts," he says.

Strange Donuts will open at 6 a.m. Friday, October 11 (Smale anticipates selling out), and then it will re-open at 9 p.m. with savory eats like the chicken-and-waffles doughnut. The shop will remain open till 2 a.m., but if the goods are all gone by the time you get there, don't worry. It will open again Saturday, and hopefully, for a long time to come after that.