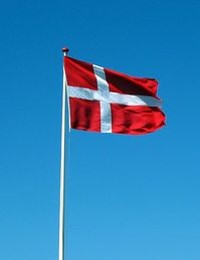 Tomasz Sienicki, Wikimedia Commons
At work, minding my own business, not thinking about sweets at all. (I swear.) Just another dreary day answering phones in a windowless, characterless room. Then in walked a coworker with a nicely sized bag. My eyes lit up: Goodies! I peeked inside. A ring comprised of individual Danish pieces.

Only problem? I've never had luck with the Danish. No matter what kind my dad brought home, they were always the same. The dough was brittle and hard instead of flaky and buttery. Cheese filling? No flavor. Fruit filling? Flat, lifeless or just plain nasty. By the time I was fourteen, I'd given up.

Who could screw up apple filling? Even in a Danish?

It was as bad as every Danish I'd had before: dry, hard, with an odd "apple" filling that tasted like no apple in this world. Still, I wanted so badly to like someone's Danish that for months after that day, every time my coworker brought in a Danish ring, I would try a piece. Those piece got smaller and smaller smaller until, ultimately, I gave up on the Danish again.

Adrienne Jones
Have I been missing something? I went to three local bakeries to find out. The samples -- each with a gooey-butter filling (yay!) -- are pictured above.

The Danish from the Daily Bread Bakery & Café (upper right) was a pleasant surprise. The dough was flaky and a bit crisp; it didn't taste like something that should be thrown in a track-and-field competition. The gooey butter filling was fluffy and sweet but not overbearing.

(Is this experiment actually working?)

My second trial was courtesy of Clayton's Bakery & Deli (the rectangular Danish). It wasn't quite as good as Daily Bread's but didn't totally disappoint, either. These folks also understand that flaky doesn't equal rock-hard. Thinly sliced almonds accompanied it, and a drizzle of icing gave it a nice pop. The filling had a very mild taste, though -- it needed oomph.

The pièce de résistance? McArthur's Bakery. What set this Danish apart was the filling. It was exactly like biting into a slice of gooey butter cake. Even better, the filling's flavor complemented rather than overwhlemed the chocolate and vanilla icing that was liberally sprinkled over the Danish. And the Danish was packed with enough of that gooey-butter filling that a normal-sized bite scored you a nice bit of it.

Heavenly! I had trouble leaving some for my husband to try.

Adrienne Jones is a writer, photographer and world-class eater who blogs at A Girl and Her Camera. She loves desserts and has been known to take to a frosting tub with little more than a spoon and a well-tuned sweet tooth. She will report on her latest favorite treat every other Friday.