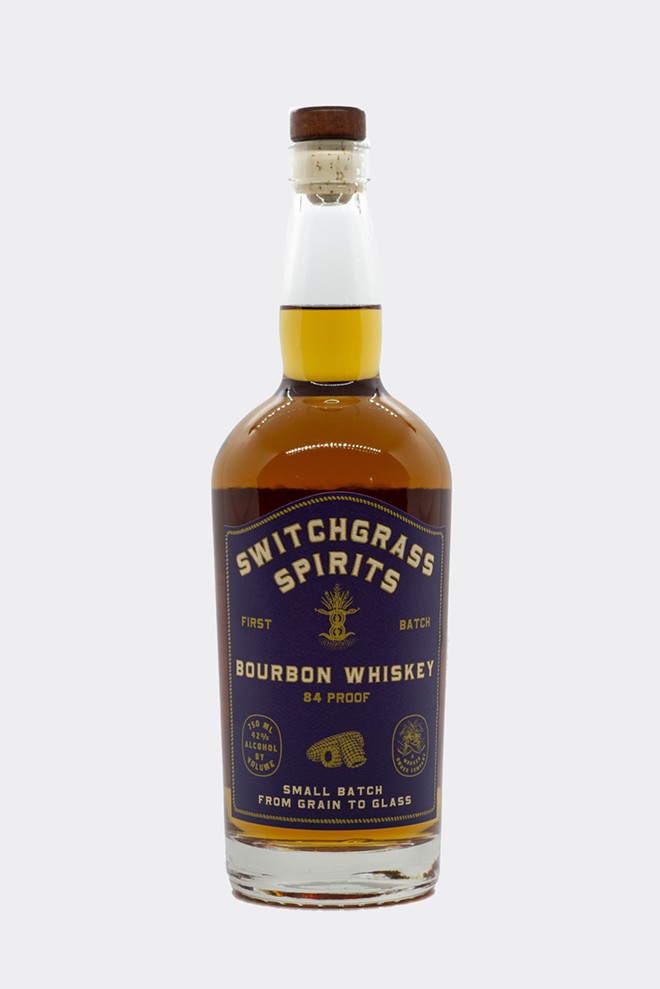 SWITCHGRASS SPIRITS
Switchgrass Spirits has adopted a craft brewer's enthusiasm in its releases.

You’d be forgiven for thinking that distillers might have to be a bit more conservative in their visions than brewers, as the pace of their releases are typically measured in the years, rather than the weeks or the months. That said, Switchgrass Spirits, a new(ish) local concern is trying to push a release schedule that’ll find a core of products settled alongside an evolving blend of collaborations and experiments.

Toward the latter point, the brand’s recently released First Batch Bourbon, described on the business’ site as “aged in 15 and 30 gallon test barrels to be a small batch, limited release. Its grain forward recipe is designed with a high wheat and barley content. This gives our bourbon its smooth, yet flavorful finish while also complimenting the natural flavors of our charred Missouri oak barrels.”

Nick Colombo, a cofounder of the worker-owned Switchgrass, says the 84 proof First Batch is the result of “our earliest days, doing test batches and experimenting with different-sized barrels.” At less than a year of age, “we honestly didn’t know how it would taste, but we were shocked at how good it was. Younger whiskeys do have a bad reputation for a reason, but we definitely weren’t embarrassed by this. So we thought, ‘Let’s just sell it now.’ Honestly, we just wanted to share it with people.”

The release of First Batch has allowed the brand to expand on what had been the first-and-only release prior, Copperhead, a “rock and rye” created of mashed rye whiskey and Belgian rock candy. That well-received debut allowed Switchgrass to build a core of initial, supporting accounts. And it’s that group of businesses that were treated to the second Switchgrass release, which is coming into the market with only about 600 bottles, a good number of which were sold at the release party at Earthbound Beer a few weeks back.

The relationship makes sense, Colombo suggests, not only because Earthbound, itself, has always shown an experimental side to their work.

“They helped us out a while ago with some issues, and we wanted to return the favor” of an event, Colombo says. “It’s super exciting to help out other businesses at this point in time and to do a bit of cross-promotion. We are a distillery that’s running a bit like a craft brewery, with limited releases and transparency and fun, whereas a lot of distilleries have a reputation for being more secretive. We just think the craft brewery style (of operation) is more fun.”

This summer, Switchgrass will be offering up a one-year rye, due in August, while a semolina wheat whiskey is finding itself in the barrel right now, with a release time to be determined.

“We have no clue when that’s coming out,” Colombo says, noting that even the taste is an emergent mystery. “We’ll release it when it tastes its best.”

There’s also Common Bond Single Malt, “a limited edition whiskey that uses a brewer’s malt not usually associated with distilling,” a promotional/ingredient collab with eight local breweries. This one is a flipside to the semolina whiskey above, as it’s got a very set release date of June 18, 2021, with a one-year aging process in Missouri oak barrels. Customers will buy directly from their favorite, participating breweries, with a certificate given to purchasers for pick-up next summer.

“We’ve got experiments that may take six to eight months,” Colombo says, “but we’re committed to the long game, too.”