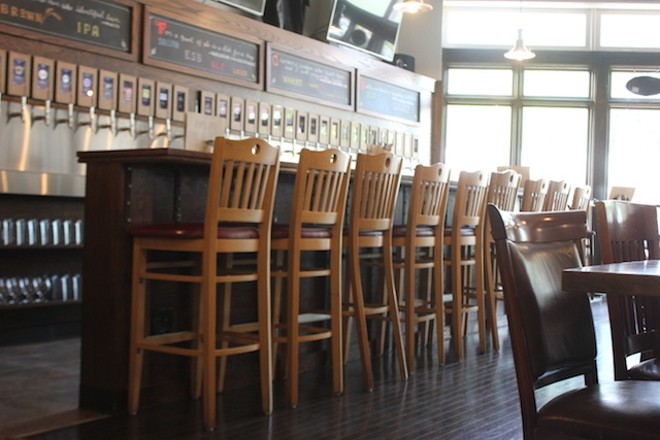 PHOTO BY SARAH FENSKE
Taps line the back wall at Tapped — but there' s no bartender behind that bar. You'll be pulling your own drinks.
Ryan and Lindsay Reel had been talking for years about opening a restaurant when Lindsay stumbled on the perfect concept in New Orleans: A self-pour wine bar. Ryan Reel was intrigued, but offered one simple edit. "We're in St. Louis," he said. "We've gotta do beer."

Earlier this month, the Reels opened their long-awaited, much-anticipated riff on that idea, Tapped (7278 Manchester Road, Maplewood; 314-899-0011). It is the first self-pour bar in the St. Louis area, outside a scaled-down version in Ballwin — offering not only 39 beers and eight wines, but even one tap of cold-pressed coffee.

"We're taking it to the extreme," Ryan Reel says proudly.

The concept sounds simple (customers pull their own taps — what could go wrong?). But the devil, of course, is in the details, and the Reels have put lots of thought — and money — into making sure theirs are just right.

Upon arrival, you check in at the hostess stand and open a tab. You then get a bracelet, but it's more a FitBit than a Cartier — simply by tapping it on the iPad-style screen behind each tap, you're accessing your account and allowing the system to monitor your pour. You can draw exactly as much as you want — a full glass, a few swigs, even just a sip or two, and you'll be charged by the ounce. Confused by the proper way to draw a tap? There's a screen carefully explaining that too.

And even though you're controlling the pour, you're not on your own. Tasting notes are included on each screen for those who like to educate themselves; those who'd rather talk their way through a decision can hit up the staff, which includes both Ryan Reel and "beer sherpa" Christopher Melkus.

PHOTO BY SARAH FENSKE
Ryan Reel quit his job managing big-box retail to take on Tapped full-time.
You won't find Bud Lite among the ever-rotating beer taps, but they are decidedly local — Schlafly, O'Fallon Brewery, Modern Brewing Co. and other local favorites are all currently represented. In fact, 38 of the 39 brews right now come from either Missouri or Illinois. The only one that doesn't is the Bourbon Barrel Ale from Kentucky-based Good Wood, which Reel loved enough to give an exception.

Ultimately, the goal is to get customers to try something new. "You might find a bar that has a good selection of draft beers, and they'll let you try a few," Reel notes. "But they're not going to let you try every single one of them. This really allows a person to try a bunch of different things. You can flip that tap open and close it right up."

The space used to be A Pizza Story, and in addition to the tables and chairs and handsome bar (now newly refinished with a penny-decked top), the Reels' purchase included the pizza oven. Using A Pizza Story's recipe as a base for experimentation, Ryan Reel developed a pie all his own, using 4 Hands Contact High in the dough.

A half-dozen pies, plus a build-your-own option, are joined on the menu by good bar food, perfect for absorbing all that beer. Try a trio of huge chicken wings with a smoky bourbon sauce, house-made spinach-artichoke rangoons or some really good sandwiches. For dessert, there are pies from Pie Oh My and cupcakes from Encore Baking. 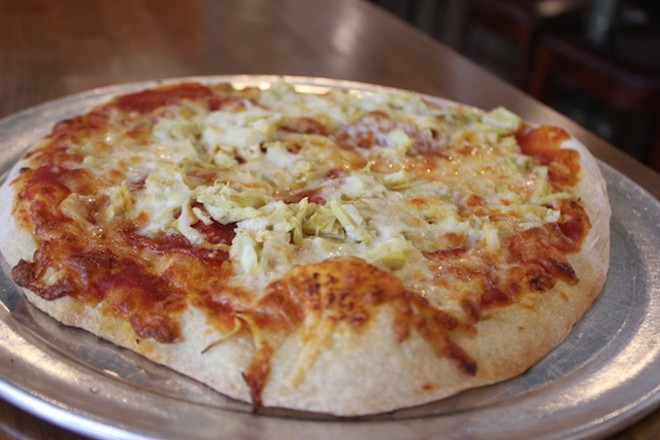 PHOTO BY SARAH FENSKE
A pepperoni and artichoke pie.
Renovations to the space included knocking out some walls so that giant windows now face the Manchester Road street parade; the gorgeous old tin ceiling is now exposed, and prints and photos showing off St. Louis' brewing history line the walls. A series of taps from Reel's personal collection sit atop the doorway — the only taps in the place you can't pour yourself.

Surprisingly for a bar, the place is family-friendly; they don't just offer high chairs but also a line of sodas. Those, however, come in bottles; eschewing the normal Coke and Pepsi for products from Excel Bottling Co. means the kids can't pour their own taps just like mom and dad. "We're all about the micro," Ryan Reel notes. And when you're sucking down 4 Hands and Schlafly, do you really want to doom your children to Sprite?

Tapped opens daily at 4 p.m., and stays open 'til midnight Friday and Saturday, 10 p.m. on Sunday and 11 p.m. Monday through Thursday. Scroll down for more photos.

PHOTO BY SARAH FENSKE
Wings are three times the size you're used to, and served with a side of creamy blue cheese.

PHOTO BY SARAH FENSKE
Some sandwiches, like this kielbasa hoagie, are served with a side of German potato salad — recipe courtesy of Ryan Reel's mother.

PHOTO BY SARAH FENSKE
Ryan Reel works the pizza oven, which easily climbs to 800 degrees during a shift. 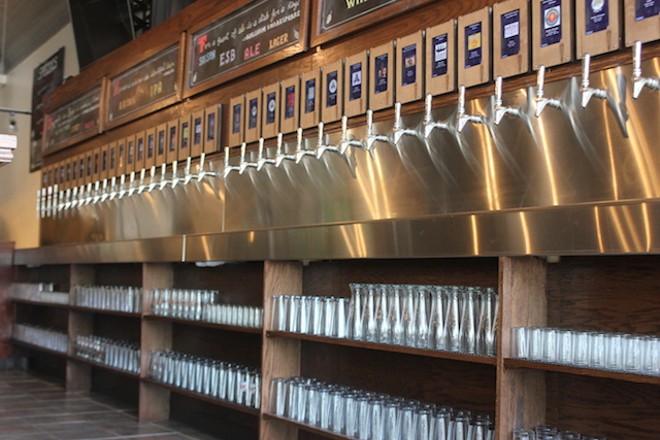 PHOTO BY SARAH FENSKE
Glasses are stored under the row of taps for easy access.

PHOTO BY SARAH FENSKE
The Reels tapped the collection of the St. Louis Brewers Guild for the prints that line one wall.

PHOTO BY SARAH FENSKE
We welcome tips and feedback. Email the author at [email protected]