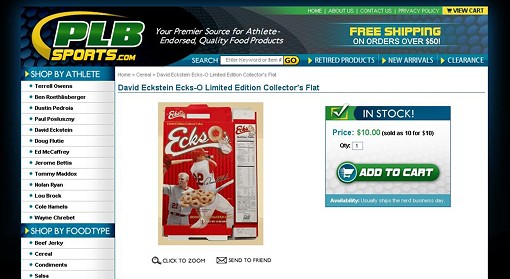 www.plbsports.com
​ It's October, the baseball playoffs are underway, and Cards fans are already contemplating suicide. We here at Gut Check are avowed baseball fans -- an old-school Baltimore Orioles ballcap and a picture of Baltimore's late Memorial Stadium sit on a shelf above my desk -- so I thought a celebration of foods branded with the name and likeness of famous ballplayers was in order.

I don't just mean any old ballplayer's face on a Wheaties box, either. I mean examples like the cereal named after former Cardinal (current Padre) David Eckstein: Ecks O's. Because nothing says scrappy World Series MVP like a bowl full of honey nut toasted oats.

www.americanmemorabilia.com
Four World Series rings? Check. Beautiful women falling over you? Check. A place in the heart of Yankees fans that ARod has driven himself into a self-destructive frenzy trying to match? Check. Your own frosted-flakes cereal called Jeter's? Check, bitches. Check.

www.plbsports.com
The influence of Latin Americans on baseball can't be understated. It can, however, be inexplicably undermined by Dustin Pedroia's Premium Black Bean and Corn Salsa.

www.checkoutmycards.com
Candy bars might be the most popular way to honor ballplayers in food: Reggie Jackson, Pete Rose and, pictured here, Ken Griffey Jr., among many others. Of course, not every ballplayer deserves a candy bar...