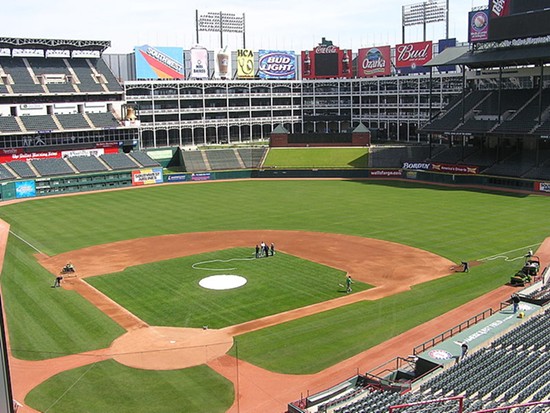 Image via
Bored? Busy yourself counting the World Series pennants flying above the Rangers' home park.

You might remember what happened last October: The St. Louis Cardinals, down to their last strike, staged an improbable comeback to win game six of the World Series. The next night, they won game seven and their eleventh championship.

So it was with equal parts confusion and bemusement that Gut Check read this item about the team that the Cardinals defeated in the World Series. It seems the Texas Rangers this season are introducing the "Champion Hot Dog" to the menu at Rangers Ballpark in Arlington.

The hot dog is a whopping two pounds of meat (served on a cutting board) with chili, shredded cheese and onions. It costs $26, or $13 per consecutive Texas Rangers World Series defeat.

The stadium's executive chef tells Fox Sports Southwest that the "Champion Hot Dog" is meant to serve four people, which is baloney because, come on, TEXAS.

Actually, a two-pound hot dog seems rather tame by today's extreme standards. Gut Check shudders to think how big the "Champion Hot Dog" would have been had Nelson Cruz played David Freese's flyball properly and the Rangers had actually, you know, won a championship.