The Adventures of Tintin and Haddock at the Scottish Arms 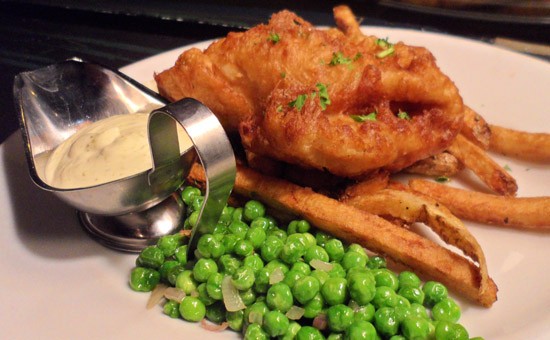 With the spate of recent comic book adaptations, it's not surprising to finally see a Tintin movie. The real surprise is how long it took. Christopher Reeve reestablished the Superman franchise in 1978; Spiderman swung across the screen in 2002. Even the uber-imperialist Phantom, the ghost who walks, got his own film back in 1996.

Unlike Clark Kent, Peter Parker or Kit Walker, however, Tintin isn't an American hero but a boy journalist from Belgium. His adventures take him to Africa, the Middle and Far East, under the sea, to the moon. To his illustrator, Hergé, the Western Hemisphere was as exotic as Tibet or Egypt. He peopled the United States with "red Indians" complete with feathered headdresses, teepees and tomahawks; He populated Mexico and South America with Mayans and Aztecs.

America largely ignored Tintin, and he has relatively limited, cult status here. Nonetheless, when the trailers for the Steven Spielberg film first aired in July, Gut Check marked the release date on our calendar and got busy re-reading our complete collection of The Adventures of Tintin comics.

Any film adaptation of a book poses problems for the producers. Long-time fans want all the minor details included, yet the script must stand up to the weight of a two-hour film. The Harry Potter and the Deathly Hallows approach divides a single book into separate movies, while the Lemony Snicket method condenses several books into one film. Tintin takes the latter route, drawing from several comics including "The Secret of the Unicorn," "Red Rackham's Treasure" and "The Crab with the Golden Claws," among others.

Image via
Tintin, as drawn by Hergé.

For long-time fans, the opening credits pay homage to Hergé's iconic illustrations; even the font for the titles reflects original cover art. As the film itself begins, we first see Tintin from the back, sitting for a caricaturist. With a final glimpse of the caricature, an image lifted straight from Hergé, we enter into the strange world of motion-capture animation.

In some ways, there's no need for all the CGI wizardry. Tintin isn't a superhero; he's a boy without superpowers, not even any gadgets à la Batman. Close-ups of the main characters, Tintin (Jamie Bell) and Captain Haddock (Andy Serkis), seem odd and unsettling, not quite cartoon and not quite real. The eyes are particularly unsettling, although the rheumy look works particularly well for conveying Haddock's alcoholism.

The technique serves best for minor characters, not viewed in close-up. The hang-dog face of Nestor the butler and the evil glower of the treacherous first mate bring Hergé's drawings to three-dimensional life. The ludicrous Milanese opera singer, Bianca Castafiore, with her edifice of a bosom and her ridiculous schnoz, is particularly well-done, although Renée Fleming, who voices Castafiore's aria, cannot possibly emit a squawk harsh enough to shatter glass.

Motion-capture also allows for stunts and camera sequences nearly impossible even with a green screen. Phantom pirate ships plunge through towering waves of desert sand, and in one long track, a falcon swoops and dives through the winding, narrow alleys of a Middle Eastern port town. The sight of Tintin's canine sidekick, Snowy, being buffeted about in the middle of a busy street provides perhaps the most terrifying moment in the film. He seems just realistic enough to be in actual danger, yet the CGI allows him to display all the personality Hergé initially gave the white terrier.

For the dinner part of our date, we opted for the fish and chips at The Scottish Arms (6-10 South Sarah Street; 314-535-0551), where they use the traditional choice of haddock for the dish -- specifically, haddock coated in a Scottish ale batter.

As we dug into the white, flakey chunks of haddock, we took in the ambiance of the Scottish Arms. The wood paneling and tall wooden booths recall the hold of The Unicorn, Haddock's ancestral ship. Like our waitress, Tintin even sports a kilt in "The Black Island."

The Adventures of Tintin ends with a clear set up for a sequel, which will likely depend on box office returns. Of course, The Phantom also set itself up for a sequel way back in 1996, and we're still waiting for that one too.