Robin Wheeler
Pick your poison: You got your Chili Cheetos on the left and a Chili Slider Bowl on the right.

This past weekend Belleville, Illinois, held its 27th chili cook-off. Forty-five vendors from local businesses and nonprofit organizations lined six blocks of downtown and circled the Veteran's Memorial Fountain, each making upward of 300 gallons of homemade chili to feed Bellevillians, who consider the chili cook-off a holiday worthy of extreme tactics.

Tiffany Sinovic of Fairview Heights, Illinois, posted a plea on Facebook Friday afternoon: "Does anyone know where my husband is? He took the day off to watch the kids, who are currently at their grandma's house and he won't answer his phone. I'm thinking he's at the chili cook-off. I know some of you are there too so I would appreciate it if you let me know if you see him."*

Marriage be damned! It's for a good cause -- all money spent on chili was donated to local charities.

While most booths stick to classic bowls of chili topped with the usual accompaniments, a few venture into chili concoctions. A Job's Daughters group hawks Chili Bellies: a snack-size bag's worth of Fritos, with chili and cheese.

But it's the svelte, energetic folks at the Belleville Running Club booth who take chili creations to a level that leaves some patrons wondering if they're trying to kill their competition on the track.

They serve a good, solid chili, palatable to most tasters: Thick with beans and meat, moderate on the spice with just a little chili smokiness. It's a good canvas for incorporating more complex flavors. Like being used in "BRC Loaded Nachos": tortilla chips topped with chili, nacho cheese and pickled jalapeños. It's a classic, and a bit surprising they're the only booth doing chili nachos at the festival.

Competing with the Chili Bellies, the runners offer Chili Cheetos: a bowl of chili with Cheetos -- not the puffed ones, which dissolve when smothered -- topped with shredded cheddar and jalapeños. The more durable, crunchy Cheetos do soften in the bowl, lending a spongy crunch plus a blast of super-cheez flavor.

Even runners hardcore enough to form a club enjoy an unhealthy treat now and then. Yet the Belleville Running Club's signature dish makes you wonder if they're trying to fatten up (if not completely eliminate) the competition:

Take one bowl. Drop in a White Castle slider -- the whole schmeer, bun, onions and all. Smother in chili, cheese and peppers.

Or, as the many of the White Castle Slider Bowl lovers told Gut Check, die of bliss. 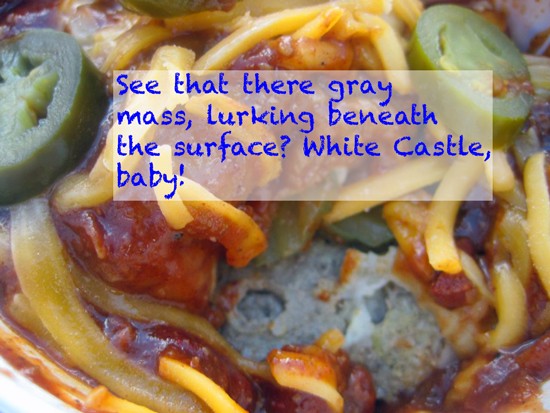 *Sinovic eventually located her husband Tom, who was working in the family's basement and had left his phone in his car. This did not stop him from replying, "I am hammered drunk with chili stains all over my clothes. See ya tomorrow, Tiff," to her plea for his whereabouts.