CHERYL BAEHR
The Bellwether is now open in Lafayette Square.


On Friday, the old City Hospital Power Plant Building fired up again, this time as the Bellwether (1419 Carroll Street, 314-380-3086), a new restaurant from the team behind Polite Society. And if, as the name suggests, it's harbinger of what's to come, the far eastern edge of Lafayette Square is about to become the city's latest hotspot.

The Bellwether is the second restaurant from proprietors Jonathan Schoen and Brian Schmitz, executive chef Thomas Futrell and bar manager Travis Hebrank, the foursome who brought Polite Society to life in the heart of Lafayette Square just over two years ago. With business going well, and plans to open a new concept in the forthcoming City Foundry in 2020, the men had no plans to open another restaurant anytime soon. However, as Hebrank explains, they got an offer they simply could not refuse.

It came courtesy of their Polite Society landlord, who is also part of the ownership group of the Power Plant Building a few blocks east on the other side of Truman. Home to Element for five years, it was ready for something new.

"Our landlord approached us late last year and asked us informally if we'd ever thought about the Element space," Hebrank says. "We started thinking about it; the space is so gorgeous and historic, and it's exactly the sort of place we'd be interested in. A few weeks passed, and Jonathan and Brian came to me and said it looked like we had a great opportunity there. We figured, let's ride the wave of Polite Society while we can, take on some risk maybe earlier than we should and move forward."

Element had been spread over two floors of the massive building, dividing the restaurant and bar business. The second floor was an open kitchen and the third floor was a cocktail lounge.

The Bellwether team decided to do things differently. They combined the restaurant and bar on the third floor, using the second floor as the kitchen and a still-under-construction private event and overflow dining space called the Reference Room. 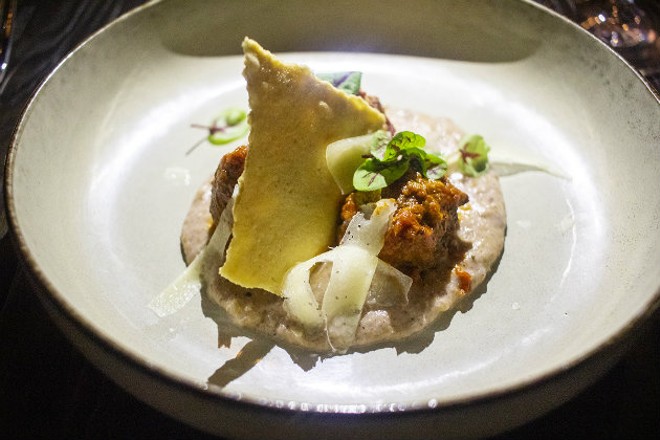 CHERYL BAEHR
Lamb meatballs are served over creamy polenta.
The reconfiguration is just one of many differences guests will find between the new restaurant and the former occupant. Unlike Element's sleek, industrial feel, the Bellwether has a soft, sultry vibe, with metallic Moroccan lanterns, plush, plum-backed booths, eggplant-colored walls and lux silvery-purple curtains that separate the dining room and elegant, back-lit bar.

The vibe the team was aiming for drove the food, Hebrank says.

"Food-wise, if the space told us anything, we interpreted it that the food should be more delicate and fine," Hebrank explains. "We were interested in testing the waters of fine dining; we like eating well and drinking nice and fancy things, but we also abhor the stuffiness that comes with that sometimes. We're trying to strike a balance of fine and delicate without the lack of fun."

Hebrank describes the food as falling under the general umbrella of New American — a term, he says, that "means we can let Tom come up with whatever he wants and, as long as we think it tastes good and is worth the money, we put it on the menu." Look for items like prime steaks, elegant small plates and an elevated wine and spirits selection. Futrell is also particularly excited about the Bellwether's handmade pastas, including ravioli with peas and chicken and, on the small plates side of the menu, mushroom and ginger dumplings. 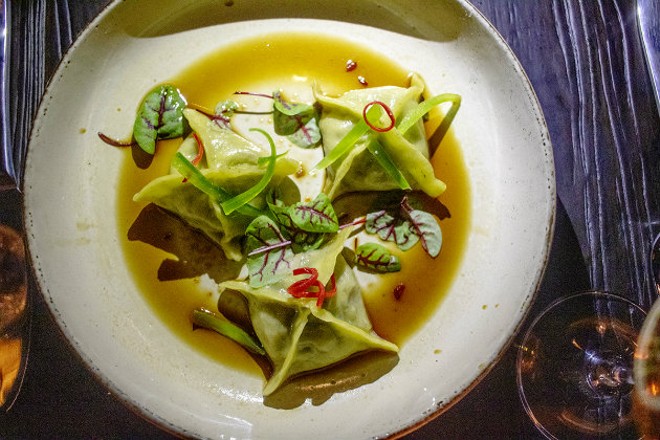 CHERYL BAEHR
Mushroom and ginger dumplings are one of the Bellwether's small plates offerings.

In addition to the dining room and bar, the Bellwether takes advantage of the building's impressive outdoor space. The third-floor patio offers the full dining room menu, while the second-floor outdoor space will be available for the Reference Room private events.

With the Bellwether only three blocks away from Polite Society, Hebrank acknowledges, there may be questions about how the restaurants compare. Though there is some continuity between the food and drink components, he describes the Bellwether as being more upscale and more of a destination.

"Because Polite Society is on the main strip of Lafayette Square, we get a lot of foot traffic," Hebrank explains. "The Bellwether is more separated from other retail in the area, so we have to draw people in. We are also just south of downtown, and there hasn't really been a strong happy hour in the area. We want to capture that."

Currently, the Bellwether is open seven days a week, from 4 until 10 p.m. The Reference Room is expected to open in the fall, with several wine dinners, chef collaborations and pop-ups currently in the works.

SARAH FENSKE
The Bellwether is located on the eastern edge of Lafayette Square, adjacent to the old City Hospital.