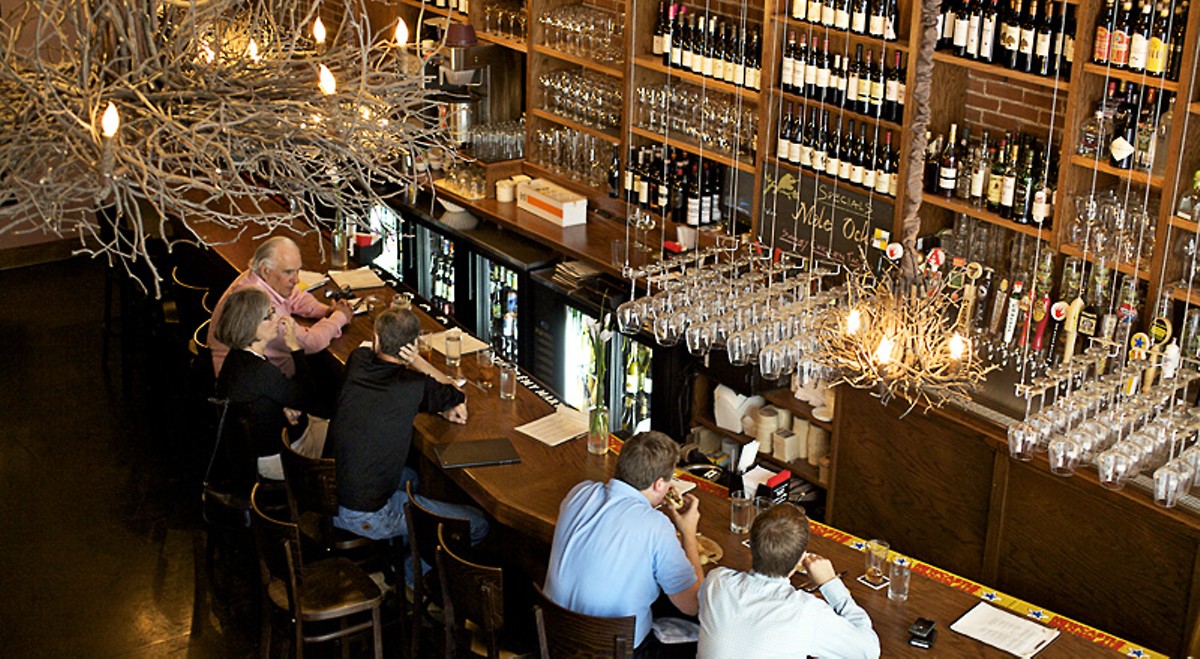 On a Monday afternoon downtown, a woman stands at a sidewalk grill on Locust Street, flipping burgers. The heady aroma of smoke and seared meat wafts around us, a welcome respite from the rank exhaust belching from workday traffic. The sight is remarkable enough, given the city's pathetic lack of street food, but later we learn that the burgers are made from grass-fed Missouri beef, an unexpected touch of the Slow Food ethos in the midst of downtown's lunch rush.

The burgers, served in red-and-white-checked paper cartons like those you might find at the ballpark or state fair — OK, Slow Food-cred points deducted for the disposable plate — are excellent, their flavor a delicate balance between the fire's char and the beef's flavor, much milder than corn-fed beef, a touch verdant. These burgers are available every Monday at the Bridge Tap House & Wine Bar, the new venture from restaurateur Dave Bailey, the man who brought us the Lafayette Square dessert and drinks hotspot Baileys' Chocolate Bar and, a block west of the Bridge, breakfast and lunch eatery Rooster.

Even without the grill out front, the exterior of the Bridge is striking on an otherwise dour block: glass doors on which is etched the restaurant's logo, a bird sitting on a tree branch, playing a violin. (The bridge of the name refers to the musical term.) On either side of the glass doors are glass panels that can be (and in this lovely mid-spring often are) opened, giving the Bridge the feel of a European café.

You enter into the bar, a space that is awesome in the original sense of the word: Light fixtures like oversize birds' nests are suspended from the ceiling. So, too, precariously, or so it seems when a breezes sways them, are racks of wine glasses. The bar itself is a handsome wooden structure, high shelves stocked with beer, wine and liquor bottles. There is the obligatory flat-screen TV in one corner, but this is unobtrusive, even during a Cards game.

The beer selection is impressive. There are three dozen or so taps, featuring some of the big names in craft brewing (Bell's, Founders, Lagunitas, New Belgium), each available in twelve- or twenty-ounce servings as well as a four-ounce tasting pour or a growler (64 ounces) to go. Another few hundred beers are available by the bottle, again mostly from American craft brewers, with a few international stars (Canada's Unibroue and Japan's Hitachino) and several Belgian breweries.

The wine list isn't as lengthy, but it provides a wide range of varietals and prices, from a $175 Bourdeaux to New World wines in the $20-to-$40 range. Several wines by the glass offer the usual suspects (pinot noir, cabernet, chardonnay) as well as a few surprises, like a sparkling rosé from Spain and the lovely Pine Ridge chenin blanc-viognier blend from Napa Valley.

Stairs lead to a mezzanine level that is the de facto dining room, a space not quite as dramatic as the bar. In truth, given the restaurant's open layout, it's surprisingly cozy. I hesitate to call it a true dining room because the Bridge's menu is casual — supple, even — able to provide a complete meal but equally satisfactory for a couple of appetizers or even a bar snack.

There is, in fact, a section of the menu entitled "Snacks," and these do go well with a glass or three of beer: popcorn dusted with sea salt and smoked paprika; roasted peanuts sweet with honey and then given the kick of chipotle pepper; warm, soft pretzels served with a thick, spicy poblano queso. I could happily nosh my way through this part of the menu, slaking my salt-spiked thirst with citrus-crisp, hoppy IPAs until I fell off my barstool.

Besides the snacks, there are "Boards," which are slightly more substantial appetizers. Though you might be drawn to the can't-miss selections (bruschetta, olives, hummus), consider the gratin of roasted beets and goat cheese: The creamy, tangy chèvre is a very good match for the tender, sweet beets, and both are topped with a generous handful of caramelized shallots.

There are no entrées, per se, but the "Pots" are a reasonably sized meal for one. The beef braised with coffee is the best of these, a hunk of meat served atop sweet-potato orzo, the beef's natural richness rounded out not with the flavor of coffee, exactly, so much as the mélange of spices you might find in a cup of terrific coffee. A hint of orange — from two wedges served atop the beef as well as, I suspect, some orange zest — adds a crucial citric brightness to the dish.

The pot of campanelle pasta with a pork and grass-fed beef bolognese sauce provides heartier pleasure, though it could use an extra dash of salt. Still, I'm impressed with the care that the Bridge puts into even this humble dish, opting for grass-fed beef when no one would notice its absence. The kitchen takes extraordinary care with meat dishes that most restaurants would serve without a second thought. The "Strip Club" sandwich, for example, is divine: gossamer slices of smoked New York strip steak, thick, crisp, peppery bacon and tender chicken breast.

Excellent roasted pork paired with ruby red grapefruit over mixed greens with goat cheese, almonds and apricots elevates a dinner salad into a satisfying entrée. (The salads are listed as "Entrée Salads," which isn't an overreach.) Here too, little things stand out, the kitchen having taken the time to candy the almonds and poach the apricots in apple juice.

Of course, a restaurateur as savvy as Bailey, who at 32 is already one of the city's best operators, knows that these little things are what set a place apart — what will allow the Bridge to thrive in spite of its out-of-the-way location. At a time when city boosters are gnashing their teeth about downtown's growth (or lack thereof), it's heartening to see someone take the gamble not simply to open a new establishment, but to do so off the well-trod Washington Avenue path and then, just for the hell of it, to grill grass-fed burgers on the sidewalk.