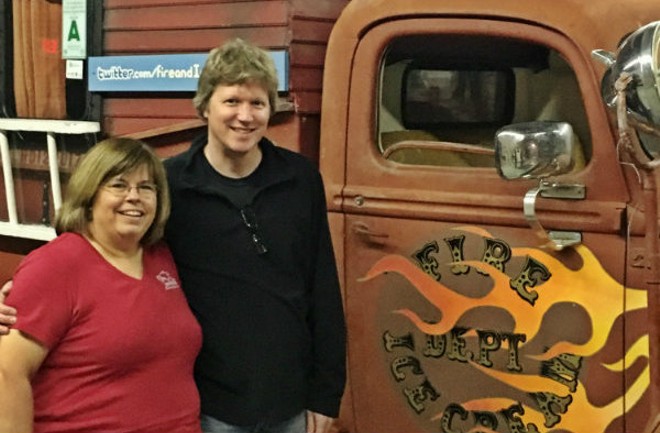 Photo courtesy of Beckie Jacobs
Beckie Jacobs, Matt Armstrong and the catalyst of their new partnership.
Beckie Jacobs, the proprietor of Serendipity Homemade Ice Cream (8130 Big Bend Blvd., 314-962-2700), has long considered Scott and Stephanie Pondrum her friends. But it wasn't until she read about it in the RFT that she realized the Pondrums were looking to sell their one-of-a-kind vintage treat-dispensing truck, the Fire & Ice Cream Truck.

And then Jacobs immediately made up for lost time.

"The minute I found out about it, I reached out to them," she says.

The conversation proved to be, well, serendipitous. Jacobs, in partnership with her friend Matt Armstrong, a Webster Groves attorney, has now purchased the truck. She plans to use it to serve Serendipity ice cream both at CityGarden, where the truck has a long-standing contract, as well as events all over the city.

"It's a perfect option for us," she says. "I always thought a truck would be a great next step for us, but I didn't want it to be just any food truck. This one is cool and kitschy and unique, just like us."

The truck isn't just unusual — it's literally the only one of its kind anywhere in the world. The Pondrums were working in theater design in Chicago when Scott Pondrum began daydreaming about a vintage fire truck that also happened to dispense ice cream. Then, at his wife's urging, he bought a circa 1946 truck and customized it to make that dream a reality. When they moved to his native St. Louis, it became more than a hobby, but rather an all-consuming business.

For the Pondrums, saying goodbye to the Fire & Ice Cream Truck was a bittersweet proposition. But for the truck, it shouldn't be a big change. After all, Jacobs notes, Serendipity was the first ice cream it dispensed.

Jacobs urges fans of the truck to keep their eyes on Twitter and Facebook. They intend to start serving out of the truck come spring ("as early as the weather will allow us"), and they'll announce pretty much any time they'll be somewhere other than CityGarden — both to bring out their fans and let other food trucks know that the CityGarden spot is available.

And if you want specific Serendipity novelties to be stocked? She wants to hear that feedback too. "If they think there's something that will be a great fit for the truck, we want to hear about it," she says.