Jennifer Silverberg
A dish at this year's Best Thai Restaurant

One thing I've learned after five years in this job? St. Louis has a lot of Thai restaurants, and they are spread out all over the metro area. After putting many, many miles on my car trying to visit as many of them as I could, here are the five Thai restaurants that have set themselves apart from the pack.

It's hard to believe that Basil Spice is not even four years old. The restaurant is so welcoming, the food and the service so reliable, that it feel as if it has always been a part of South Grand's restaurant scene. Try the pla song kruang, a piece of fried fish topped with carrot, red onion, apple and cashew, one of my 100 Favorite Dishes.

As hidden as a restaurant can be in downtown Clayton, Rearn Thai is sneakily impressive. There's little on the menu that you haven't seen before -- hell, there's even crab rangoon (it's pretty tasty, by the way) -- yet I've never walked out here disappointed. Those old warhorses, the red and green curries, are an especially impressive balance of sweetness, savor and heat. 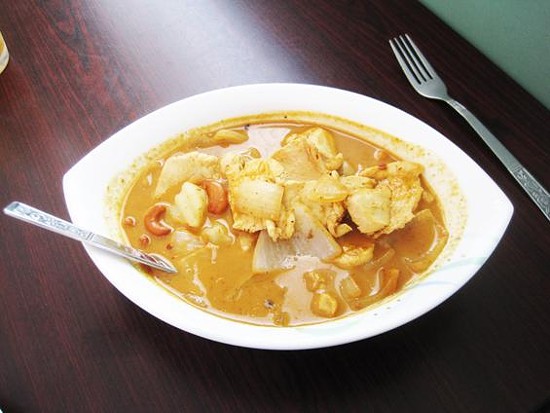 This is what we talk about when we talk about no-frills restaurants. Don't let the humble surroundings fool you, though: This Florissant gem serves up versions of your favorite Thai dishes that are more flavorful and complex than you thought possible. My first taste of the massaman curry here (another of my 100 Favorite Dishes) remains one of my most potent memories as a diner.

The younger, sleeker sibling of Simply Thai, Pearl Café has developed a cult following in the past year for its spicy-food challenge. Those whose idea of a good Thai meal doesn't involve ghost peppers and searing pain are in luck, however: This is a terrific restaurant, its menu a distillation of popular Thai dishes and several house specialties -- the Thai chile squid is a personal favorite -- each expertly prepared and beautifully presented.

Though tucked away in a shabby Creve Coeur strip mall, Addie's Thai House is a surprisingly elegant space, and in town where we tend to equate "ethnic" restaurants with cheap eats, the menu is boldly upscale. This was one of the easier picks I had to make: Addie's Thai House is the Best Thai Restaurant in St. Louis in 2011.