The Future of Monarch: Gut Check Suggests and Speculates 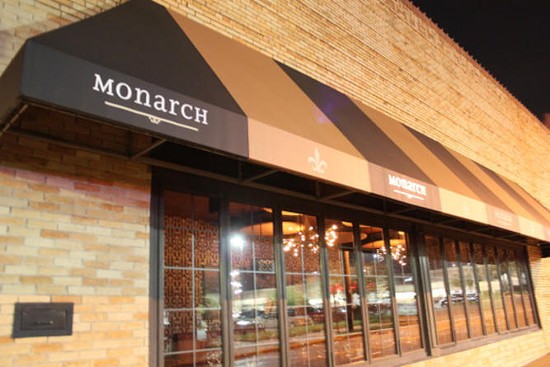 As you likely know by now, Monarch closed after service this past Saturday, March 10. The closure leaves a hole in the dining scene and one of our most talented chefs without a professional kitchen to call his own. It also means a large piece of property in the heart of Maplewood stands empty.

Monarch owners Aaron Teitelbaum and Jeff Orbin retain possession of the building. What should they do with it? Gut Check considered the likely options and then decided that, by themselves, those options were, well, likely. So, as a public service, we've added some of our own suggestions to the list of obvious possibilities and ranked them by the probability of their occurring.

Cosmopolitan, high-end restaurants are so pre-Great Recession. Nowadays diners have embraced a more rustic aesthetic. They want to know the farm that raised their food, and how well it was treated there. They'd love to visit the farm themselves, if only it weren't so inconvenient to their daily commute. Now they don't have to. As a bonus, Monarch's large space allows the zoo and butcher shop to be separated so that the kids can pet the cute lil' lamb while the parents tell the butcher which cuts of they want.

Yes, Gerard Craft already has four restaurants. And, yes, two of them will open by the end of the summer in nearby Clayton. But can you say this is totally out of the realm of possibility?

Think the Firebird for the grown and sexy. No longer would smooth jazz concerts be relegated to the (relatively) cavernous environs of the Pagaent. Guitar & saxes & (in a nod to Monarch's influence on the local drinking scene) old-school cocktails slung by new-school mixologists.

Like #7, Monarch honors its past as the restaurant that introduced the cocktail wizardry of Ted Kilgore to St. Louis. In this case, however, it takes the Dave & Buster's (or, if you prefer a more local analogy, the after-dark crowd at City Museum) route by acknowledging that adults secretly want to relive the fun of childhood, except while smashed out of their minds.

Diners post-2008 want to be coddled without spending much cash. And while fast-food chains have flirted in the past with such higher-end touches as table service and booze, they haven't been able to overcome the fact that their restaurants are grease-splotched fast-food joints. Monarch, on the other hand, offers a turn-key upscale setting in which a ThickBurger -- we choose Hardee's because of the local ties of parent company CKE -- wouldn't need a semi-orgasmic supermodel to sell its charms.

So much for the long shots (i.e., our suggestions). Page through for the likely contenders.