The King Joins the List of Mascots We Don't Miss. 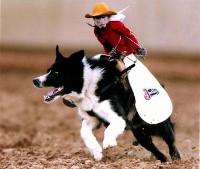 Image via
Whiplash the Cowboy Monkey left the glamorous world of food mascots to follow his real passion -- the rodeo.

The King is dead. Long live the king.

This week Burger King retired its terrifying, plasticine mascot who's kept potential diners away from Burger King restaurants for the better part of a decade. Burger King wants your mom's business, and The King isn't doing it for her.

Honestly? Is anyone going to miss horror nuggets like this?

The King's retirement comes on the heels of news that cartoon characters on food packages make kids nag their moms for junk food. Although we call this "news" in the lightest sense of the word because we all remember whining for Frosted Flakes just because of Tony the Tiger. Or pleading to not go to McDonald's because of a debilitating anxiety disorder caused by untreated coulrophobia.

This has us thinking about food mascots that have gone to the great pre-packaged graveyard.

The Frito Bandito Aye aye aye aye, indeed. Frito-Lay retired its animated Mexican stereotype in 1971, thanks to a House subcommittee hearing on ethnic defamation in broadcast media. He's not missed.

Hamburglar Because what better way to influence young children than with a criminal?