The Kitchens are Alive with the Sound of Music 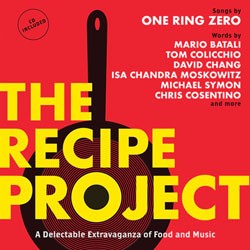 After a recent lunch at a Chinese hog trough buffet where we were lulled into stupor by the gentle tones of "Rock-a-Bye-Baby" on the sound system and one too many sticks of chicken meat, we've been thinking a lot about music and food.

Turns out we're not the only ones. Around the same time we heard about Turntable Kitchen, a blog where San Francisco couple Kelsey and Matthew write about food and music pairings. And for a $25 monthly fee, the couple will send you "a curated food and music discovery experience" in the form of a 7" vinyl single, a digital mix tape, three original recipes, a few dried specialty ingredients and the pair's thoughts on it all.

Music might alter the taste of wine. Last week it was reported that British researcher Aidan North has linked wine's flavor to the music being played while it's consumed. Four groups tasted the same wines with vastly different soundtracks, never failing to describe the wine in words that also described the music.

So what are some St. Louis chefs listening to while they create the food we love? Peio Aramburu of Bistro 1130 - "Anything, but it has to be in tune; when it's just making noise, and the sound isn't good, it isn't worth having on. It has to be close to perfect, otherwise I can't take it. I whistle along, but I'm not musical."

Reine Bayoc of SweetArt Bakeshop - "Anything Latin: Afro-Cuban, Poncho Sanchez...something steady. If it's too slow, I'm moving too slow."

John Griffiths of Truffles - "Actually, we don't have music in the kitchen. It's weird, and I won't put on the radio at home when I'm cooking either. I like quiet. It's calming and soothing to me, so there's no music in my kitchen."

Eli Herrir of the Mediterranean Grill - "We don't play music in the kitchen, only in the restaurant. During lunch, we play soft rock, and during dinner, we have instrumental music."

Jimmy Hippchen of The Crow's Nest - "Hip-hop and reggae."

Mike Johnson of Cyrano's and Boogaloo - "The Clash."

Steve Komorek of Trattoria Marcella - "I am so diverse -- from AC/DC to Barry Manilow to Grateful Dead."

Todd Lough of Bixby's - "I honestly don't like a radio playing in my kitchen. I think it's distracting."

Ivy Magruder of Vin de Set - "Johnny Cash. 'A Boy Named Sue' because I almost named my son Sue. Named him Cash instead."

Casey Shiller of Jilly's Cupcake Bar - "At school, there's no music allowed in my kitchen. [Laughs] At Jilly's, I'm a Y98 kind of guy."