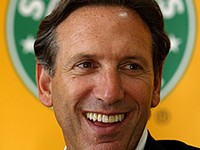 Yesterday, the Morning Brew led with an analysis of Starbucks' problems. Later that day, the company replaced its CEO, James L. Donald, with Chairman -- and by far its most well known executive -- Howard Schultz. (New York Times)

China assesses its work in strengthening food safety: Progress has been made, but there's still much to be done. (AP)