Dave Nelson is the author of the blog Beer, Wine and Whisky. He writes about wine for Gut Check every Tuesday.

Over the past decade I've consumed more wine from Clos Roche Blanche than from any other producer. In fact, it's not even close. The quality, variety, value and philosophy offered by the estate make it irresistible to me. This post is the first in a series exploring in detail wineries and winemakers that I find particularly compelling.

Clos Roche Blanche is located near the small town of Mareuil-sur-Cher, about 40 miles southeast of Tours in the heart of the Loire Valley in France. It is set upon the river Cher, a major tributary of the Loire. French photographer and wine blogger Bertrand Celce has visited the property and taken beautiful photographs.

The estate comprises about 44 acres of vines, equally split among white and red varieties. The expected grapes for the middle Loire are present -- sauvignon blanc and cabernet franc --- but there is also côt (the local name for malbec), pineau d'aunis, gamay, cabernet sauvignon and even a bit of chardonnay.

From these grapes, Clos Roche Blanche produces a broad range of wines. In the U.S., I've seen varietal bottlings of each grape, a combination of côt and cabernet franc called Pif, and a red pineau d'aunis (they make most into a delicious rosé) labeled "l'Arpent Rouge." I've managed to drink plenty of all of them over the years, but the gamay and the cabernet (a blend of franc and sauvignon) are probably my favorites. 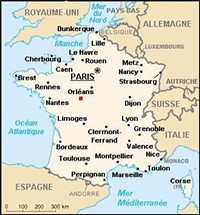 The red dot is the approximate location of Mareuil-sur-Cher.
Remarkably, Clos Roche Blanche is essentially a three-person operation. The property has been in Catherine Roussel's family for over 100 years (and some of the côt vines date from that time), and she has been in control now for more than three decades. Didier Barrouillet, a mathematician in his previous career, makes the wines, and a single employee assists them as needed.

Sitting thousands of miles away, and having only to open a bottle to enjoy the produce of Catherine and Didier's very hard labors, I also admire the way they farm and make their wine. Clos Roche Blanche has been organic since 1995, but it is not static. Instead, Catherine and Didier are constantly looking to improve the vineyard. For a while, they went to biodynamic practices, and they now operate in a true multi-crop setting where a range of plants grow among the vines to restore biodiversity.

As a result of these practices, Clos Roche Blanche uses no pesticides, organic or not, on their grapes. As reported by Peter Liem, Didier's continual work to cultivate a healthy diversity in the vineyards has resulted in the discovery of a potential cure for a deadly vine fungus by planting leeks among his vines. The depth of the connection between Didier and Catherine and the whole of their property, their willingness to continue to adapt and improve, is inspiring.

The pure approach continues in the cellar, where Didier exercises great restraint in his wine-making. Many winemakers talk about getting out of the way of great grapes, but Didier really seems to pull it off. The result is wines of stunning focus and purity that have an uncanny ability to refresh and enliven the drinker. When I open Clos Roche Blanche at dinner parties, they are almost always the first bottles drained -- even when people with little or no interest in wine are my guests.

On top of all of this, the wines are outrageous bargains. The gamay and rosé are usually the least expensive, coming in sub-$15, while the others are usually still sub-$20. Your local source is Bon Vivant Wines, who had the 2007 gamay last time I was in, and may be able to order others.

Having worked so hard for so long, Catherine and Didier decided to rent about half of their vines to another producer following the 2008 harvest. That development, along with the very small size of the 2008 harvest, means that now is the time to try to find Clos Roche Blanche wines if you have not sampled them before. They receive my highest recommendation.