A sampling of brisket and ribs at the Precinct. | Nancy Stiles

When the Precinct (1900 Locust Avenue; 314-588-8899) debuted in October, it was a new concept for owners Mark Winfield and Jim Edmonds -- Edmonds 15 Steakhouse previously occupied the space. The re-branding was set to coincide with the St. Louis Metropolitan Police Department headquarters moving in next door, which has since been delayed until July. After tepid reviews and lots of customer feedback, Winfield and Edmonds hired a new chef and launched a new menu on March 4.

Everybody deserves a second chance, so we agreed to check out the Precinct's revamped offering.

We started out with a few appetizer picks: a classic wedge salad, some calamari, a flatbread and spicy chicken dip. The blue cheese on the salad was pretty good, and it's a safe bet for that friend who somehow has an aversion to fried food. The calamari had a good zest to it, although it was a bit salty. The flatbread had yummy toppings -- goat cheese, tomato, mushrooms, asparagus -- but the bread itself was too flimsy in execution. Our obsession really lies with the cheesy chicken dip. It's topped with jalapenos, which are candied, giving them an almost sweet taste that counters the spice. We wish the chicken was more shredded so we could get it on the chip easily, but we kept coming back to it throughout the meal. 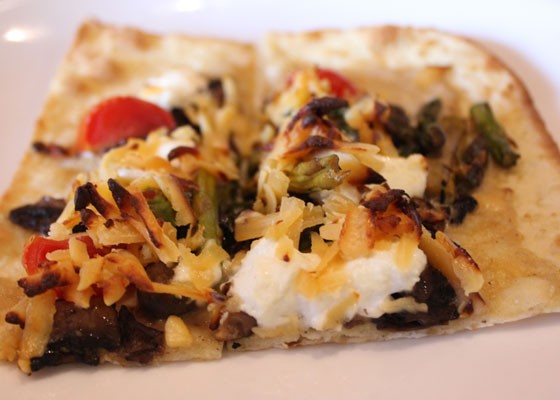 Chef Ben Welch tells us he smoked the brisket with hickory for fourteen hours the day before. "I need to get Mike Johnson [of SugarFire Smokehouse] in here," he laughs. "I hear he's my competition!" It's easy to dry out brisket, but Welch's was tender and delicious, especially with the house barbecue sauce. "The brisket is my baby," he says.

The "BBQ Carolina Steak Burger" is a mouthful, to say the least. A burger topped with the succulent brisket is tasty, but it's hard to actually eat the thing. You'll like the "Southwest Steak Burger" as long as you like spice (duh) -- it comes with avocado, chorizo, a fried egg, candied jalapenos and Sriracha aioli.

Winfield admits the old menu wasn't working. "How do you part ways with someone you've worked with 50 hours a week for years?" he says of recently departed executive chef Andrew Shrensker. "He's very talented, but his heart just wasn't in pub food." Winfield also says business has increased substantially since the menu's revamp.

There are still some kinks to work out at the Precinct, but we'll definitely be going back for that brisket. "I try to think of it as kick-ass tailgating food," Welch says.