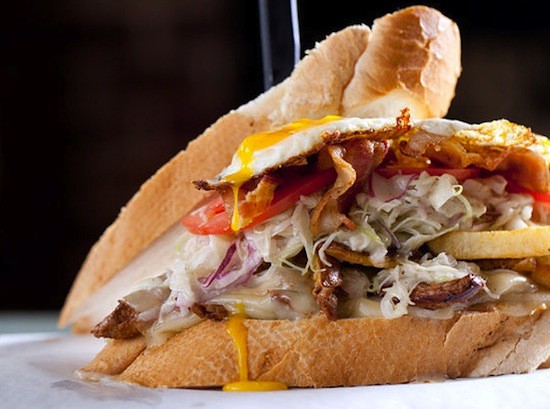 The Shack's "Triple-Dog-Dare-You" Shack-which with a double serving of steak, bacon and a fried egg. | Jennifer Silverberg

OG Hospitality Group announced plans for a second location of the Shack (3818 Laclede Avenue) earlier this year, but soon it was also revealed that the year-and-a-half-old midtown location would close April 25. After less than a month, the new Shack Pub Grub opened May 15 at 13645 Big Bend in Valley Park, "serving breakfast, lunch and sometimes dinner."

See also: The Shack Pubgrub's "Shack-Which": One of 100 St. Louis Dishes You Must Eat Right Now

Co-owner Brant Baldanza told St. Louis Magazine that the midtown location only closed after the group was approached by a developer who wants to turn the space into an apartment complex.

The new Shack is in the former Wild Agave space, which is in the same plaza as other OG restaurants the Corner Pub & Grill and the Tavern Kitchen & Bar. We named the Shack the Best Bar Food in St. Louis in 2013, and we're sure the new joint will be just as good, despite a slightly different menu.