Food: Sandwiches: brie, apple and walnut; goat cheese, basil, and tomato. Yeah, I know how to class up the track.

Difficulty: Medium. While initially very intimidating, no one at the park batted an eye at my sneaking-tote. Sandwiches were, of course, tubular and individually wrapped in aluminum foil.

The turnstiles at Fairmount Park have a certain "we're supposed to walk across Mordor but our civilization was so busy building adorable burrows and brewing quality beers that it hasn't discovered shoes" sense of foreboding about them. There are large signs posted at exactly my eye level that insist you can't bring in food and drink. To enter the Park proper, you have to pay an attendant in a glass booth just before stepping through a narrow metal turnstile. I shrugged the straps of my sneaking tote from my shoulder to the crook of my fingers, dropping it below the scrutiny of that all-seeing booth.

After passing that Rubicon, however, my die still wasn't definitively cast. The employees of Fairmount Park are virtually indistinguishable from the patrons. In the interest of keeping order inside the park, a ban on customers wearing polo shirts would do a lot more than banning food and beverage.

After a few initial moments of fear that I might have to show the inside of my bag, I calmed down. It was thrilling for me, really. In twenty years of sneaking food into the movies, I have never been searched. After a program of careful cultivation of my Sneaking skills and a natural sangfroid that turns Coke to Icees in their cups, I don't fear this from any tie-wearing theater clerk.

But the track's not my natural element, and movie theaters haven't traditionally had problems with the Mafia.

Chad Garrison
This is the first time I've written for you about something I do more frequently than this blog would suggest: sneaking homemade food into the movies. While there is a wealth of conveniently sneakable food available, nowhere do you have more control over its shape and dimensions, the perfection of its flavor in enhancing your entertainment experience, than in your own kitchen.

For my trip to the track, I prepared sandwiches along the following parameters:

2) Sandwiches must be a highly sneakable shape. As tubular foods are the most perfect for stacking, stashing, and laying naturally in the bottom of a bag without poking out at odd angles, they are the most sneakable of foods. I accomplished this by getting a baguette and sectioning it into quarters.

3) Sandwiches must be classy in inverse proportion to cursing at racehorses to run faster unless they are prepared to be shipped to Lyons as steak. I accomplished this with two of my favorite snuck-sandwich formulae -- I refuse to call instructions for making food where the major action is putting things between two slices of bread a recipe; thank you, Burger Bar Cookbook -- which have the benefit of using fresh ingredients and not dripping. At all. 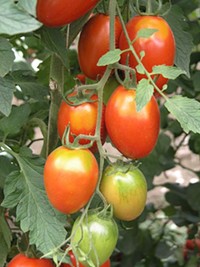 User "Goldlocki," Wikimedia Commons
Split baguette sections and give them a gentle toast. I used chevre, a spreadable goat cheese that creeps much more smoothly across warm bread than cold. Spread it on both bread halves and add cracked black pepper and salt, depending on how salty the cheese is already. Add a single layer of thinly-sliced Roma tomatoes to each half. Pile fresh basil leaves on one half, snap shut, wrap in aluminum foil.

Romas are less juicy than other kinds of tomatoes (cutting down on the drip factor), and they are the perfect size for containment within a skinny baguette. The acidic, not-too-sweet Romas are also a great offset for the richness of the cheese and the woody sweetness of the fresh basil. Don't get me wrong -- I'm a woman known to fall in love with a homegrown tomato. One summer I lived off tomato sandwiches. But those were rambling, two-fisted beauties with the juice soaking into the bread. They are not a good thing to furtively disclose from the dark confines of your bag, noshing on them one-handed while you peruse the racing form.

Don't scimp on the basil, either. It's not going to bite. Use it like you would lettuce or spinach.

Split baguette sections. Spread one half with dijon mustard. Add thinly-sliced sections of green apple --it took my about half a medium apple for both sandwiches even though I nibbled some of the slices for "quality control." Place slices of brie on the opposite half. Toast, both halves open. While the brie is still warm, press walnut pieces into its melty goodness. Snap shut, wrap in aluminum foil. If you're lucky and not far away from your sneaking venue, this will still be warm when you unwrap it.

If you want this sandwich to be sweeter, either add some apricot jam or use a sweeter crisp apple. It would be a mistake to cut the mustard (heh) out of the formula, though. Even with a sweet sandwich, it adds depth and brings out flavors in the brie.

If I had been thrown out of Fairmount Park for sneaking, this is the sandwich I'd have brandished over my head to confirm everyone's worst fears about the speculative gentrifiers of the track and their fancy cheese eating ways.

Chad Garrison
Both of these sandwiches went well with beer and either would have been good with a chilled white wine. Not that you'd want to sneak in a beverage. The beer is cheap and plentiful, the lines to get it practically non-existent. Two bucks got me a freshly poured Blue Moon (bottled, alas) with a generous, smirking wedge of orange, rendering me an even cheaper date than usual. As for wine, they do offer it. On dollar drink night, no less.

Do not drink the dollar horse wine.

Don't drink it even if you go to the track by yourself and no one sees you, and you just want to try it. You'll know you drank the dollar horse wine and then other people will read it in the very texture of your life, a Braille of shame.

Do not drink the dollar horse wine.

Fairmount Park was a lot of fun, filled with fewer sketchy old men than multi-generational families. They have a full food-court and automated betting machines as well as cold-eyed tellers, so it's fairly easy to place your bet in the 25-30 minutes between each race. There's a paddock where you can watch a horse being walked around by its trainers and, with all the grace and power of Horsekind, try to bite anything that gets within three feet of its face.

A claiming race is one in which any of the horses running at the track that night may be purchased on the spot for a pre-set price. While I wasn't in the market for a horse that night, I definitely did better betting on races where I'd seen the horses exercising before and been able to compare their gaits and physiques.

The Doctor, my mysterious long-term gentleman caller, is an astonishingly successful gambler. He tucked a twenty dollar bill into my bra when we got to the track and told me to see what I could turn it into by the end of the sixth race. I made a profit of -$6, but I didn't lose it all. The Doctor made money from his stake, as he's wont to do. I am currently concerned this means he claimed me.