The World Goblet Round 1: France vs. Italy

Two heavyweight wine nations face off in the last of our first round of group matches. Italy earns its no. 1 seed thanks to its plethora of inexpensive wines made from distinctive indigenous grape varieties; France slips to no. 2 only because so many of its low-end offerings, while still tasty, exceed our $12 limit. 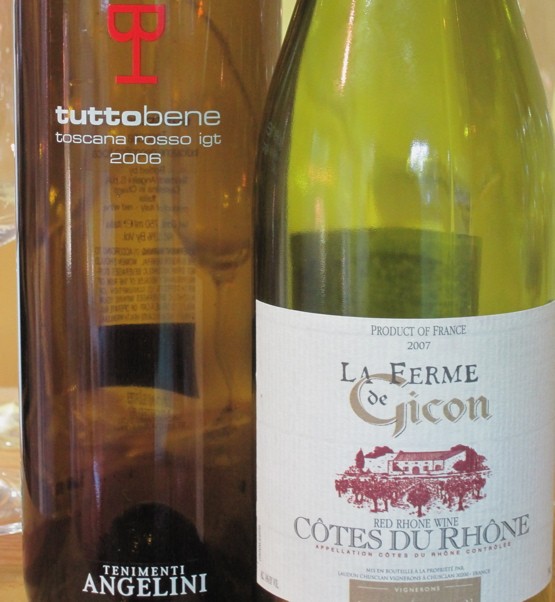 Dave Nelson
A battle of the behemoths: Italy and France!

Classic, basic Côtes du Rhône in every respect (good and bad) here. It's a clear medium ruby. It's a grenache-dominated blend, which translates to ripe strawberry fruit; the other varieties bring to the table plum, leather and clay. Not a lot of complexity, but a nice drinker. A pretty wine from a co-op in Chuslan, one of the original Côtes du Rhône villages.

2006 Tuttobene Toscano Rosso IGT ($9) Slightly deeper color than the Côtes du Rhône against which it faces off. Smells a bit like Everclear and old snow tires at first, but that blows off with some aeration to reveal impressive cherry fruit. Some of that aroma translates pleasantly into the flavor, along with substantial fuzzy tannins. This is a wine that lingers long, and it needs food desperately.

A blend of 50 percent merlot, 40 percent sangiovese and 10 percent canaiolo, the traditional Chianti blending variety. Though it tasted better the second day, the off aromas having completely dissipated, still no great shakes.

The French entrant didn't quite give the 110 percent promised by its back label (70 percent grenache, 20 percent syrah, 10 percent cinsault, 10 percent carignan), it put forth plenty to fend off the somewhat odd Italian entrant. Bob Gray at Grapevine Wines says the Tuttobene was one of the most polarizing wines they'd ever opened for tasting -- people either bought multiple bottles (or cases) or didn't even bother finishing off their sample pour.