A St. Peters restaurant is infusing a dog and bun with edible gold leaf 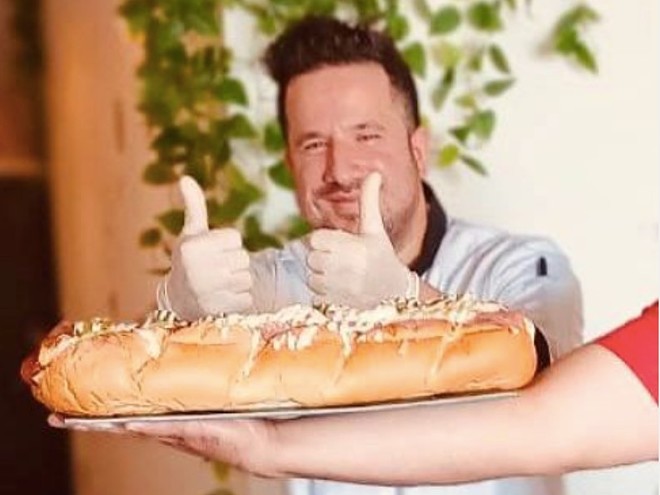 Courtesy of Lucciano's Gourmet Dogs
Lucciano Bacci, pictured with his two-foot-long Nightmare Dog, is on a mission to make the world's most expensive hot dog.

Giovanni Bacilieri remembers the first hot dog that got him hooked. It was from a casual restaurant in his hometown of Barranquilla, Colombia, a place known as much for its native daughter, Shakira, as its robust hot-dog culture. At this restaurant, as was typical of other sausage-centric eateries in Barranquilla, the menu was filled with a seemingly endless number of choices, but five-year-old Bacilieri settled on one covered in a sweet and sticky pineapple concoction. It changed his life.

"It was called a Hawaiian dog, and I just fell in love," Bacilieri says. "Ever since then, I've wanted to have a hot dog restaurant, but I wanted to bring it to a gourmet level unlike anything anyone has ever seen before."

Bacilieri is well on his way to making that happen at his three-month-old restaurant, Lucciano's Gourmet Dogs (318 Mid Rivers Mall Drive, Suite E; 636-387-1090). Not only has he finally realized his dream of bringing a high-end hot dog experience to the world though his St. Peters eatery, he's hoping to cement his legacy as the world's top purveyor of tubular-shaped meat luxury with his extravagant Lucciano dog, a $1,000 hot dog that, if he has his way, will hold the Guinness World Record for the world's most expensive hot dog.

Bacilieri describes the Lucciano dog as the ultimate haute dog; despite its $1,000 price tag, the dish actually uses $2,900 worth of ingredients, including a housemade pork and beef hot dog infused with edible gold leaf and marinated in tequila that costs $400 per bottle, a bun made with the same gold leaf, layers of Japanese A5 Wagyu placed over the dog and blue bamboo finishing salt that costs $100 per gram. He notes that he has already submitted his application to Guinness World Records and is confident that he will secure the award once it goes through the review process — something that has been a longtime dream of his.

"Ever since I was little, I'd read the Guinness World Records book and wonder what I could do to be in there," Bacilieri says. "I knew it would have to be for something I really loved. When I looked around and saw other expensive hot dogs, I noticed that they didn't put a lot of love and effort into it. They just bought some caviar and put it on top of a hot dog. Here, we are putting love into it both inside and out."

Bacilieri knows the Lucciano dog, which requires 24-hour advance notice to order, is a spectacle, but he's hopeful that the attention will get people in to try one of his more reasonably priced dogs. Even without the high-end ingredients, he believes in his product, which is made from scratch using fresh, high quality ingredients, down to the ketchup. Though the world record is his immediate goal, his ultimate dream is to make the St. Louis area a world-class hot dog city that will rival such sausage powerhouses as New York and Chicago.