This Is the Couple Getting Married at Anheuser-Busch's Oktoberfest 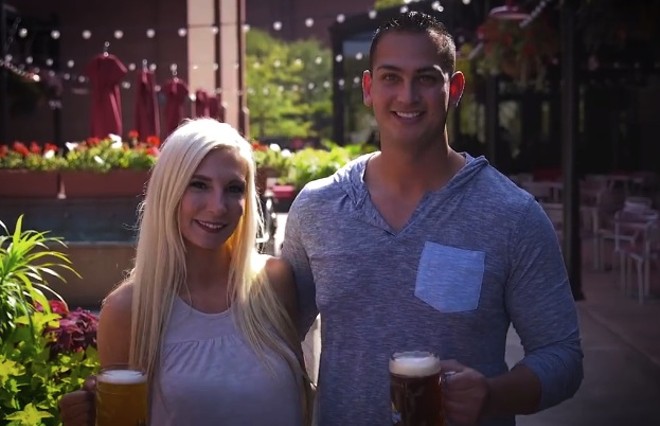 As part of Anheuser-Busch's Oktoberfest celebration this weekend, Chisholm and Vanbibber were asked by the brewery to get married at the event. And while it might seem easy to mock the idea of a wedding at Oktoberfest ("Seriously? How drunk were you???"), it turns out history is not on the side of sarcasm.

"The wedding component is what actually started Oktoberfest back in 1810," Anheuser-Busch's Tom Kraus explains. "It was the wedding ceremony and celebration for Prince Ludwig, who would go on to become the King of Bavaria. When we started to uncover that, we saw that it was a natural component. It allows us to bring an authentic, traditional piece of Oktoberfest to life."

Chisholm and Vanbibber were selected to take on the roles of the modern-day Prince Ludwig and his bride as part of a partnership between Anheuser-Busch and the VFW. Vanbibber is currently a Chemical Operations Specialist in the Army National Guard, and when his name was brought up, he and his fiance didn't hesitate.

"We decided to say yes because it is something that will be a great memory for us to have for years to come," Chisholm says. "This opportunity provides a unique experience to us."

Though the couple plan on incorporating elements of the Oktoberfest into their day, don't expect Vanbibber to walk down the aisle in lederhosen. "This is their day," Kraus says. "We will give them some private moments before we kick off the public festivities." Their wedding ceremony will be traditional, and American. It will just be a component of the festival.

"We're very thankful we were asked to do this," Vanbibber says. "We're forever grateful."

But there is one twist: As their first official act as a married couple, Chisholm and Vanbibber will assist Mayor Francis Slay as he taps the first keg of beer, marking the official start of the festivities. Now that's a lot more exciting than cutting a cake.