Todd Ehlers, Wikimedia Commons
A few months ago, I introduced you to one of my favorite people in the world, my British pal Sally. This week, I got a care package from the U.K.: two cookbooks from Sally's mom's collection, copyright 1962. They're weathered with use, which I love, and full of notes from Sally about which recipes her mom used to make. She even left some clipped magazine recipes hidden among the pages.

Sally's mom, Gill, was classmates with Mick Jagger at the London School of Economics. There's much debate on the nature of their relationship. Gill claims they lunched regularly. Sally and her sister think Gill's not telling the whole story.

Yes, I'm giddy to own cookbooks that nourished one of my favorite people with recipes cooked by someone who shared sandwiches with Sir Mick. 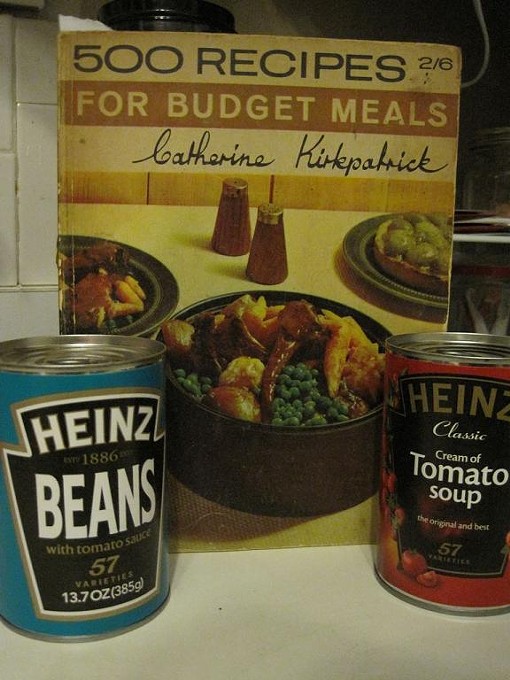 Robin Wheeler
I'm not going to make fun of British food. That's so overdone. Most jokes about British food stem from our being picky-ass Americans who get grossed out by offal.

I am going to make fun of British canned food.

Gill's 1962 edition of 500 Recipes for Budget Meals by Catherine Kirkpatrick doesn't lack, especially in dishes built on Heinz Baked Beanz. I'm fascinated by these beans because of that Who album cover, but I've never tried them. Global Foods only carries the plain version, not the kind with sausage required for Bean and Sausage Crumble. No matter. They did have the real Heinz Cream of Tomato Soup.