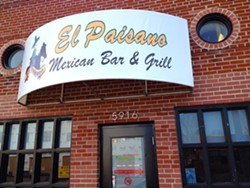 - We told you last month that the local chain of Mexican restaurants El Paisano Mexican Bar & Grill was opening a new location at 5916 Delmar Boulevard, where Delmar intersects with Hamilton Avenue, a few blocks east of the Delmar Loop. (The space formerly held the Twisted Olive.) The restaurant opened yesterday. According to the restaurant's Facebook page, its regular hours are 11 a.m.-9 p.m. Sunday through Thursday and 11 a.m.-10:30 p.m. Friday and Saturday. You can reach the restaurant at 314-645-7455.

- Mama Gusto's 314 (7700 Ivory Avenue; 314-638-8676) announced yesterday on its Facebook page that it had closed. George Mahe of St. Louis Magazine first noticed the post, which we read -- but by the time we went back to link it in this post, the restaurant's Facebook page appeared to have been taken down. The post mentioned that its location wasn't working and that a reopening in Soulard or west St. Louis County was possible.

- Grub Street, the food blog New York magazine, posted an epic slideshow entitled "Pizza Perfection: 101 Awesome American Pies". No, the slideshow doesn't have 101 pages -- it has 111 pages. At any rate, the only St. Louis pizza to make the list is Imo's Pizza (multiple locations).

Imo's, a chain that dots the area, turns out what could be considered paragons of the [St. Louis-style] form.

Included among the deep-dish pizzas is Little Star Pizza in San Francisco, from which Pi Pizzeria (multiple locations) bought the recipe for its cornmeal-crust pies.