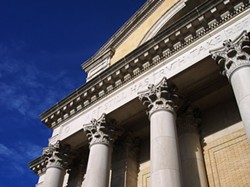 Image via
The Saint Louis Art Museum revealed this week that its new wing, scheduled to open in 2013, will feature a 100-seat restaurant and a 60-seat café. What those restaurants will be -- and who will run them -- is still very much up in the air.

Interested restaurateurs have until Friday, August 25, to contact the museum or consultants Manask & Associates to express interest.

Meanwhile, Monarch (7401 Manchester Road, Maplewood; 314-644-3995) announced that it will donate 10 percent of its proceeds to charity every Tuesday from August 16 through October 25. A different charity will be featured each Tuesday, beginning with the Juvenile Diabetes Research Foundation.