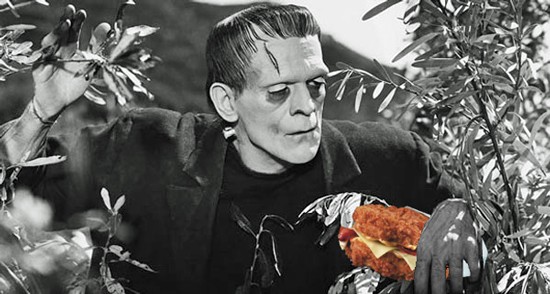 Alllllllrighty, folks! The theme of this post: These foods shouldn't exist.

Creators of the following high-calorie, mixed-metaphor monstrosities flew a little too close to the sun (remember what happened to Prometheus?), and yet their charred and grease-soaked bastard children of Fast Food Nation live on in infamy. 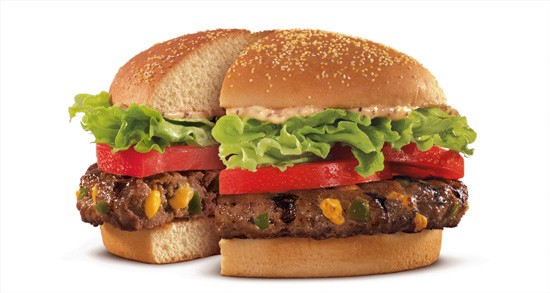 5. Burger King's Jalapeno & Cheddar BK Stuffed Steakhouse Breaking in at No. 5: the latest attempt to "upgrade" the cornerstone of the fast-food industry. This ain't no burger, people. This is mediocre meat loaf on a bun. 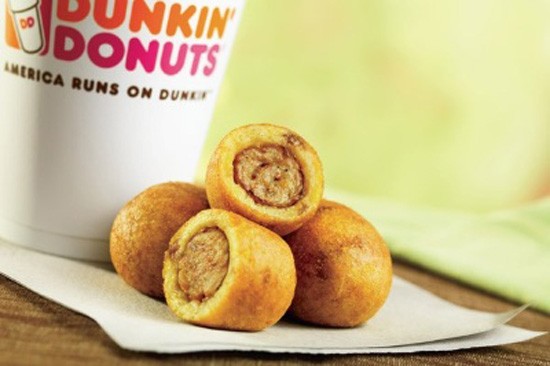 4. Dunkin' Donuts' Meat Munchkins Sausage wrapped in a pancake. Shrunk to bite-size nibbles so as not to intimidate. Sounds perfect, right? Wrong! The sausage is pre-soaked in maple syrup in an attempt to stuff all the sweet and succulent flavors of traditional breakfast foods into one greasy, 100-calorie popper. These "munchkins" took a bad trip to the wrong side of the rainbow. 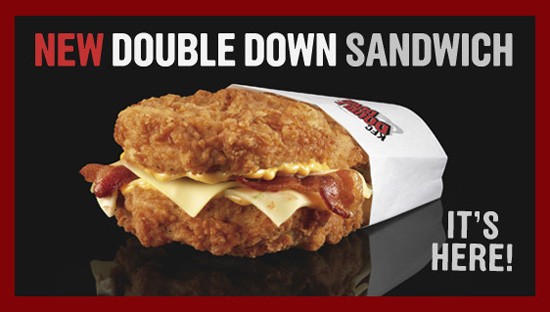 via kfc.com
The house always wins with KFC's Double Down.

3. Kentucky Fried Chicken's Double Down Maybe the KFC braintrust thought they could simultaneously tap into the zero-carb-diet and witless-masculinity markets. It's a lovechild, no doubt: bacon coated in two kinds of cheese and the Colonel's Sauce nestled between two fried chicken breasts. Ian Froeb thoroughly investigated the specimen following its release and found it to be a "triumph of marketing over substance." The Double D takes top honors in creepy-dead-animal-powers, however, as it tweets in the first-person @kfcdoubledown -- and frankly, the chickenwich is a tad, ahem, cocky.
2. McFail This slot is a tie -- among all the epic Mc-Miscalculations made by those guys under the Golden Arches. Remember the McBrat and the Hula Burger -- a slice of pineapple juicing through two buns -- conceived by Ray Kroc himself to tap into the Catholic Lent market? These blips in McDonald's quest for world domination make the McRib and McGriddle seem downright logical. The latest? Forget Taco Bell's mysterious Pacific Shrimp Taco (and you're worried about their beef?!). The McLobster is making a comeback! 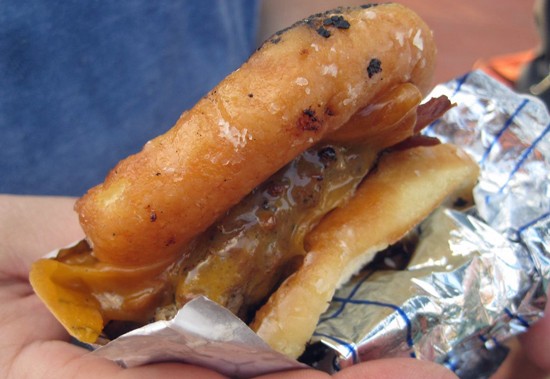 Robin Wheeler
Don't it just make you proud to be a St. Louisan?

1. Luther Burger The Gateway Grizzlies claim that this benevolent beast was created at GCS Ballpark in Sauget, Illinois, and we welcome this misfit to the long line of successful food mutations invented in the St. Louis metro area. The sandwich, apparently named for Luther Vandross, is a bacon cheeseburger with a sliced and grilled Krispy Kreme glazed doughnut serving as bun. It's as sweet, savory and soulful as its namesake, proving that sometimes two wrongs can make a right.