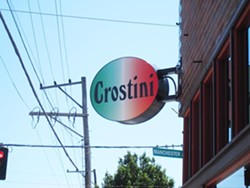 
Update: (Wedesday, October 26, 8:52 a.m.) Indeed, the end has arrived.
Gut Check didn't have any luck getting in touch with Crostini owner Eric Winbigler, but Ligaya Figueras of Sauce was able to track him down, and he confirmed that the restaurant has closed.
Winbigler said the restaurant didn't have enough business to be viable. Also, there was this:

Winbigler also noted that the "wrong type of crowd" was patronizing the restaurant on Friday night. "We wanted to be a place for families to come," he explained. Instead, customers were "loud and obnoxious."

Perhaps they'd enjoyed one too many mojitos? As of this morning, the final post on Crostini's Facebook page was the following:

The original post follows after the jump.
The signs aren't conclusive -- but they don't suggest much reason for hope, either.

The family-oriented Italian restaurant opened at the western edge of Forest Park Southeast's Grove district at the beginning of September. However, George Mahe of St. Louis Magazine reports that when he tried to visit Crostini for lunch yesterday, October 19, not only was it closed during its regular lunch hours, but the liquor bottles had been removed from the shelves of the bar -- a bad (though not necessarily terminal) sign.
Attempts to reach owner Eric Winbigler have been unsuccessful so far. Crostini last posted on the wall of its Facebook page on Thursday, October 13.

Meanwhile, my Post-Dispatch counterpart Joe Bonwich published his review of Crostini just today, but if his schedule is anything like mine, he likely paid his final visit to the restaurant a week ago, if not longer.

More as I learn it.