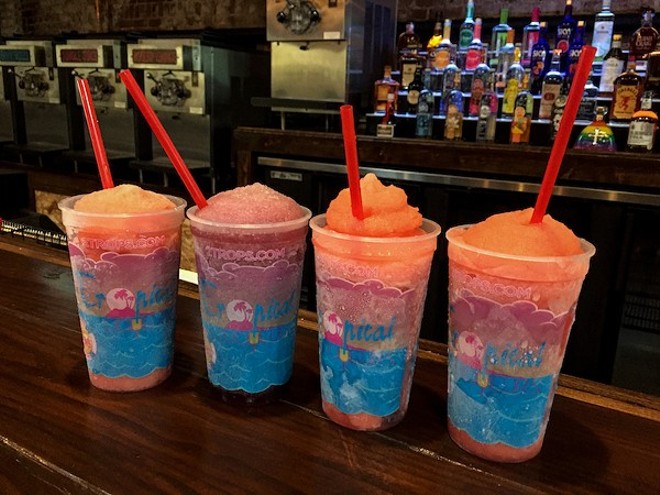 SARAH FENSKE
Trops has now been open in the Grove for one year.
If you'd like a side of ranch dressing with your boozy slushy, you're in luck: St. Louis' ranch-dressing themed restaurant, Twisted Ranch, will be taking over the food service inside Tropical Liqueurs (4104 Manchester Avenue).

Beloved by generations of Mizzou students in Columbia, the slushy bar opened its Grove outpost last May after a rocky false start a few years earlier in Soulard. (Its new neighbors, suffice it to say, have been far happier with the bar's current location in a nightlife district.) At the time, the food window inside operated by Guerrilla Street Food, but they pulled out last October. Twisted Ranch now plans to take over the kitchen and be open for business later this summer.

Twisted Ranch co-owner/founder Chad Allen said the menu is still being finalized, but would include familiar favorites, as well as some new items.

“We truly believe that there’s no food that can’t taste even better with ranch … and not just basic ranch, but ranch in new, unexpected flavors. We’re excited to share this with even more guests at Tropical Liqueurs,” said Allen.

The ranch dressing-themed restaurant — yes, every menu item incorporates some form of ranch seasoning! — drew national buzz when it first opened in Soulard in 2015. But while a good percentage of the coverage involved cocked eyebrows, the restaurant has quietly won a steady clientele. It even expanded, leaving its original digs at Eighth and Lafayette for a much bigger space on Seventh Street.

The Trops' order window will be its first counter-service affair.

“We’re excited to partner with such a great St. Louis brand. We have worked with their team on special events over the past few months and our guests have enjoyed everything they have brought to the table,” said Trops' co-owner Billy Thompson in a press release.

Can ranch-flavored slushies be next? At this point, we wouldn't put anything past the ranch dressing juggernaut.

Editor's note: We updated the story two hours after publication to include the month that Guerrilla Street Food pulled out of Trops.