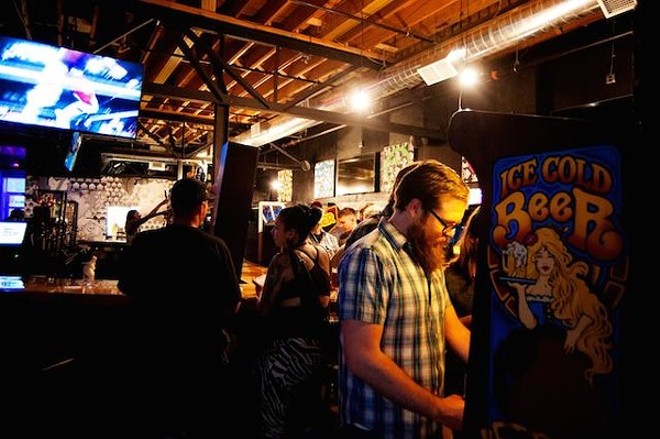 BETSY RUDICIL/COURTESY OF UP-DOWN
Up-Down has found success in Des Moines, Minneapolis and Kansas City. It's now about to open in St. Louis.
Three years after Herbie's announced it was leaving the Central West End, and two years after Up-Down Arcade earned a liquor license to open in its place, the bar is finally ready to open its doors.

“I couldn’t be more excited about the opening," he said in a press release. "We really hope people enjoy Up-Down as much as we do. We are very appreciative of all the people in St. Louis who encouraged and supported us, and we plan to be a positive part of the Central West End for many years to come.”

In mentioning encouragement and support, Ivey is not engaging in hyperbole. Overcoming some opposition from neighbors who wished for a restaurant like Herbie's rather than an arcade bar, Iowa-based Up-Down earned sufficient signatures from enough neighbors to get a liquor license at City Hall — only to see the city sued by two other neighbors, who'd opposed the issuance. The city won its case last June, but even after that, the opposing neighbors appealed. That appeal is still pending.

Even so, the bar is moving forward. Joey Akers, the general manager of Up-Down STL, says the company has done significant work to the building in the last year, from adding new plumbing, electrical and HVAC to some structural changes. "We opened things up so there's a flow between the rooms," he says. "It's really beautiful on the inside now — and it also keeps the uniqueness that it had as Herbie's and Balaban's." Up-Down also added a fully walled courtyard, including some noise mitigation features to keep neighbors happy (or at least not returning to City Hall, complaints in hand).

And did we mention there will be arcade games? They're only 25 cents to play, and Up-Down promises there will be more than 60 vintage arcade games and pinball machines over its two floors. There will also be three bars in a complex that now spans approximately 7,500 square feet.

For vittles, Up-Down promises 60 craft beers on tap as well as cocktails, as well as a quick-service food window offering pizza by the slice and a small menu of sandwiches and salads.

Up-Down STL's grand opening will be held next Friday from 5 p.m. to 1:30 a.m. The first 100 guests will receive free tokens. After that, the bar will be open Monday through Friday from 3 p.m. until 1:30 a.m. and Saturday through Sunday from noon until 2 a.m. See its website for more details.