Welcome to Girl Walks Into a Bar, a weekly Gut Check feature that spotlights local bars and bartenders. This week, Ettie Berneking profiles Van Goghz Martini Bar & Bistro's Shelay Spencer. Below is a Q&A with Spencer, followed by the recipe for a Strawberry Lemon Drop. 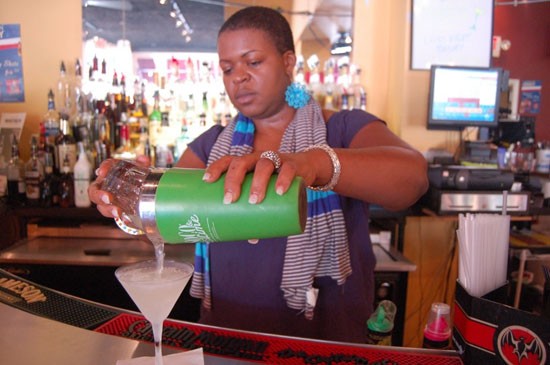 Shelay Spencer might get into trouble for her improv work behind the bar, but we say, "Keep it going, girl; you know your stuff." Spencer has been a waitress and bartender at Van Goghz Martini Bar & Bistro (3200 Shenandoah Avenue; 314-865-3345) for three years. She says it took her eight months to master the art of bartending, but now that she has learned the basics, she's having fun making up new drinks of her own -- though they aren't always a smash hit.

We popped in for an early-morning martini and were pleasantly surprised by the Strawberry Lemon Drop she placed in front of us. Unlike the strawberry drinks served by the bucket at Applebee's, this one comes in much smaller quantity. It doesn't reek of sweetness or alcohol. To be honest, you can't even taste the booze. That's the trick: This beverage is so good, you'll want to down it in a few gulps. Not a terrible decision for the first fifteen minutes, maybe, but the taste is deceiving: It does have plenty of liquor. Sip responsibly.

Describe your bartending style in three words: Improvised. I get in trouble a lot for that. I might know a customer likes a really sweet drink, so I'll add a little more simple syrup than usual. Then they come, and I'm not here, and it's not sweet enough for them. I experiment making my own drinks as well. Spiced rum and grape soda is a terrible combination.

Girl walks into a bar and orders a _______. She has just earned your undying admiration. A Dirty Birdie: Grey Goose and olive juice. It's intense but popular. It's how we get new people. It's great liquor but not great for a new timer because you can't taste the alcohol. It will sneak up on you. We like watching people after they've had one. They normally stumble off. All you can taste is the olive.

The most dumbass/bizarre drink anyone's ever asked for: Old fashioned. People think of margaritas, but it's not an old fashioned margarita. They think of the rum, muddled cherries and oranges, so they're like give me the old fashioned. And then they're upset because it's nasty liquor, and it's not a margarita.

Other than your own bar, where do you go to get a good drink, and what do you have? Joey B's on the Landing. They have really good pizza, and they know me when I walk in. I have family members who have worked there for years. I usually drink Absolut and cranberry.

One thing most people don't know about bartending: We keep a lot of secrets, bartenders. You have to. It's any bartender anywhere you go. You see a lot of things. Regulars coming in with a different woman and whatnot.

Best/worst/most exciting thing you've witnessed at your bar? Well, I lost a bet and had to shave my head two weeks ago. I don't remember what the bet was... I was intoxicated. I can't even remember. But I'll keep my hair short. I keep a picture of my long hair with me, though. 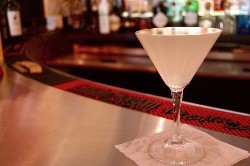