So many meatless moons gone by. | Tara Mahadevan

Editor's note: Tara Mahadevan may not have been Gut Check's first "Veggielante," but she's worn the mantle for over a year now. She's off to new, exciting adventures in New York, and we asked her to wax nostalgic on thirteen months' worth of exploring vegetarian options in St. Louis. We wish her good luck and even better eating.

I am sad to say that I must bid adieu to the Veggielante. I had a great time visiting St. Louis' neighborhoods and sampling the various vegetarian dishes that our city has to offer. But the state of vegetarian fare in St. Louis has vastly improved since I began writing this column in February 2013 -- every restaurant is not only making more of an effort to cater to vegetarians, but to vegan, gluten-free and paleo diets as well.

As part of my farewell, I thought I'd share my three favorite dishes from my vegetarian escapades as the Veggielante.

There's no way I can forget the dreamy texture of Table's hand pies, which were stuffed with cauliflower, hazelnuts and manchego. While bearing a similar resemblance to empanadas, Table's version had less of a crunch, and more of a soft, pielike texture. I was upset to hear that Table closed earlier this month, but hope chef Cassy Vires would be happy to hear that, even months later, this dish stays with me.

I think it's safe to say that sweet-potato fries plus marshmallow plus syrup equals a win, and it's definitely one of the more creative-yet-simple dishes I came across while writing this column. Although the marshmallow on the Kitchen Sink's sweet-potato fries isn't technically vegetarian, I had to overlook my purist vegetarian ideologies in order to indulge in these fries. How can anyone say no to a side dish that doubles as a dessert? 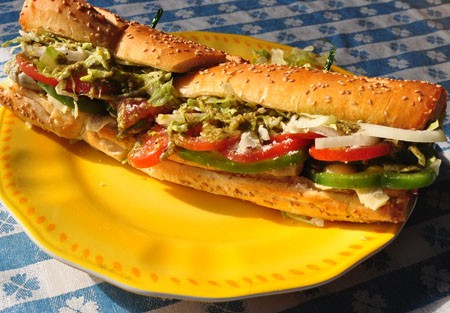 "Sunny's Veggie" at Adriana's On The Hill | Tara Mahadevan

Adriana's On The Hill's "Sunny's Veggie" was the biggest sandwich I've ever laid eyes on. There was no way I could eat it all. This sub deeply satisfied my sandwich craving, and was loaded with the best veggies and cheese a little ol' vegetarian like me could ask for. What I was lacking the most was a bib and a partner, as this sandwich was both messy and shareable. Definitely don't make the same mistakes I did -- share and share alike, vegetarians of St. Louis.

Gut Check is always hungry for tips. E-mail us!