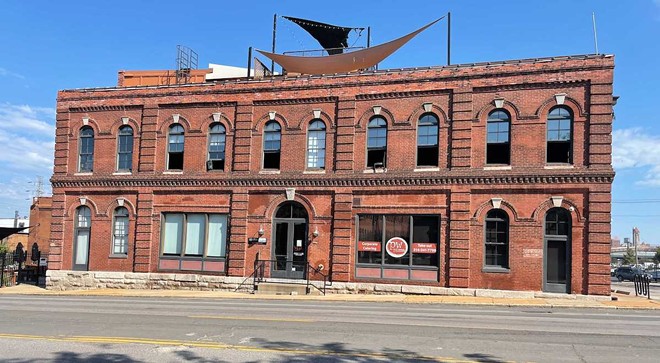 BENJAMIN SIMON
Vin de Set this morning after an early morning fire damaged the restaurant. It is now closed indefinitely.

St. Louis Fire Department responded to the fire around 4 a.m. Flames appeared to engulf the rooftop patio of the three-story brick building at 2017 Chouteau.

No injuries were reported.

The building, situated on the edge of Lafayette Square, contains two additional restaurants, PW Pizza and the 21st Street Brewers Bar, as well as the special event space Moulin.

A note on the restaurant's web site this morning stated that all of the eateries on site are currently closed. "Due to a fire Monday morning at Vin de Set, PW Pizza and 21st Street Brewers bar will be temporarily closed for cleaning. Vin de Set was heavily damaged and will be closed indefinitely," the note reads. "We’ll update everyone via social and our newsletter when each venue will open back up."

The restaurants are owned by Paul and Wendy Hamilton, who repurposed the historic Centennial Malt House into a dining destination.  The couple also owns two restaurants just across the street, Hamilton's Urban Steakhouse and the brand-new Winnie's Wine Bar. Both remain open, according to the note on the website. "If you’re looking to help us through this difficult time, please visit any of our other restaurants or purchase a gift card," the note continues. "Vin de Set holds a special place in the hearts of us all."

Many shared dramatic footage and images of the fire on Twitter.

BREAKING…. An overnight fire on the roof of the #VINDESET Restaurant along Manchester.
Nobody hurt, the matter is under investigation. #SPIRE crews are on the scene. #tisl @ksdknews pic.twitter.com/tIE1Y8bf14

oh,,,, Vin de Set is on fire across the street from me 😢 glad we went one last time a few weeks ago… wtf