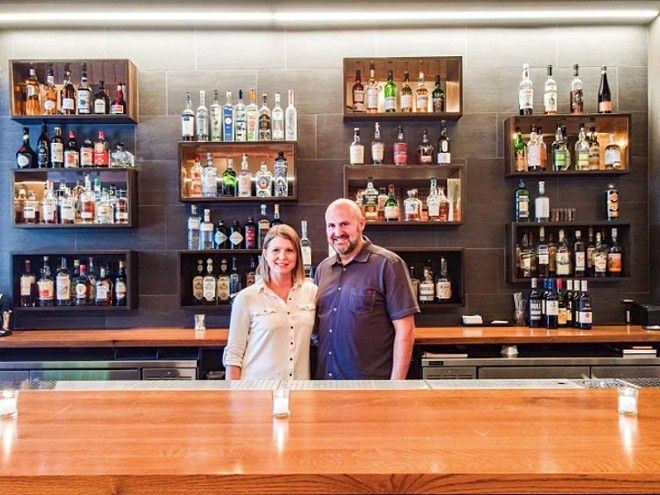 When Vito and Amy Racanelli signed on to be the creative forces behind the newly imagined Tempus — an opportunity that followed the departure of the restaurant's acclaimed chef and creative force Ben Grupe — they knew they had only one option: to think completely out of the box.

"When I got in here, it was amazing," Vito Racanelli says. "But I got to talking and realized that I don't think I'd want to open a restaurant because there's too much pressure. Ben Grupe is an artist, and to follow that up is one hard act to follow. It's like being a comedian after Dave Chappelle; who wants to follow that?"

The Racanellis appear up to the challenge. This week, Tempus announced that the husband-and-wife team of chefs were tapped by owner Peter Brickler to help him guide the space in a new direction. Their appointment gives a bit of clarity to the future of the restaurant, which was shadowed in uncertainty after Grupe, its star chef and visionary, departed in late August. At that time, Brickler promised to "restructure and refresh" the restaurant following a brief hiatus. Now, three months later, he and the Racanellis are ready to show the St. Louis dining community what that means.

Their plans represent a dramatic departure from the upscale dining that defined the restaurant during Grupe's tenure. As Racanelli explains, Tempus will cease to be a sit-down restaurant with daily service, but will instead be converted into a boutique events and pop-up space, takeout window, and dinner series venue intentionally designed to be ever-changing.

"Every time you get into the restaurant business, you think of a concept and then find yourself in the walls of that concept, and you are stuck there," Racanelli says. "With this idea, we can tear down the walls; we are not stuck with anything, and we can try all sorts of things."

Though they are eager to showcase a variety of voices at the newly imagined Tempus, the Racanellis will lead the first series of pop-ups in order to feel out the space. Their inaugural event is a ticketed spaghetti dinner that will be held on Wednesday, November 23, the evening before Thanksgiving, and Racanelli is eager to lead.

"We just want to loosen up and keep it simple," Racanelli says.

Following the spaghetti dinner launch event, the Racanellis will turn their attention to a pop-up series called ROOTS: A Culinary Journey. It's an idea that Racanelli has wanted to pursue for some time, as he sees it as an opportunity for chefs to share their stories and showcase their unique journeys.

"It's a way for people to really look at the mind of chef — what were the triggers that motivated that person to want to get into this crazy career," Racanelli says. "There are a million different things, and I want to give chefs like me the opportunity and set a stage for them to explain that and to see the chef as person, as well as the trials and tribulations they went through and how personal this is to them."

Racanelli will kick off the ROOTS series on Wednesday, November 30, by sharing with diners the Italian upbringing that served as the spark for his own culinary journey. Though he does not have a date listed for subsequent ROOTS pop-ups, he teases that legendary Jim Fiala of the Crossing and Acero is on deck for a dinner that he describes as being "like a TED Talk, but for food."

In addition to the pop-ups and special events, the Racanellis will be be operating a Fridays-only takeout concept, "The Window," which will consist of a walkup window on the Newstead Avenue side of the building where guests can order meals to go, including the Racanellis' Big V's Craft BBQ, which had previously been operating out of O'Fallon's now-shuttered Missouri Beer Company. The Window, which debuts Friday, November 18, will open at 11 a.m. and serve until food is sold out.

"It's a bit unorthodox what we are doing, but I think it fits the space," Racanelli says. "There's always going to be a new chapter to it; it's going to be a lot of fun."