Want Guys With That? Hamburger Mary's strolls into St. Louis with LGBT flair — and food to match. 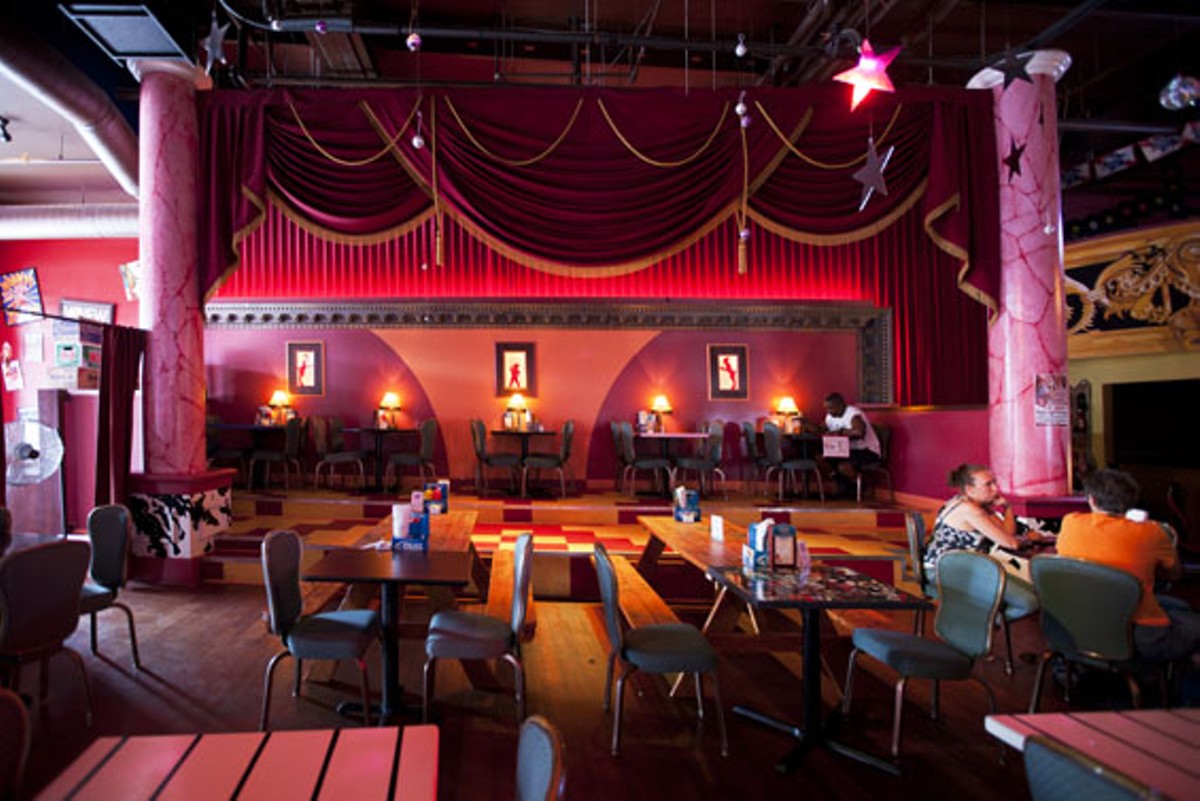 Want Guys With That? Hamburger Mary's strolls into St. Louis with LGBT flair — and food to match.

If you fail to crack at least one little smile at Hamburger Mary's , you must be having a very bad day indeed. At St. Louis' inaugural outpost of this national mini-chain, mirror balls, red theater curtains and faux chandeliers made of pearl necklaces hang from the ceiling, and the menu includes double entendres like "Spinny Dipper" (spinach-artichoke dip) and the "Guacamole B.J." burger (bacon and jack cheese). Your bill arrives tucked into a bright red or animal-print stiletto heel. Will the stereo system play Madonna's "Vogue"? It did on four of my five visits.

Hamburger Mary's describes itself as "an open-minded bar and grille for open-minded people." By its own reckoning, it's the only national restaurant chain to court the LGBT community. A group of friends opened the original Mary's in San Francisco in 1972. (There's no literal "Mary"; the term was once a slang reference to a gay man.) That location has closed, but the chain, jointly owned by franchisees in Chicago and Los Angeles, now boasts twelve locations across seven states. To quote the restaurant's own promotional material, the goal is a "flamboyant" dining experience. In practice this makes for an exceptionally friendly ambiance no matter your preference — besides vegan, maybe. (There are salads, at least.)

The St. Louis location opened in January at the midtown address previously occupied by the nightclub Lush. It's a split-level design, with dining tables (a few of them on a raised platform) and a bar on the main level and more tables, another bar and pool tables on a spacious mezzanine level. The overall look, deliberate campiness aside, is that of a well-loved neighborhood bar and grill. Patrons' black-Sharpie graffiti already covers several tables.

As you'd expect, burgers make up the centerpiece of the menu. Ordering isn't unlike picking out a new car. First you choose the style. The "Guacamole B.J.," for example, tops the patty with bacon, Monterey jack cheese and guacamole. The "Sloppy Mary" comes with chili, cheddar and jack cheeses, and diced red onion. Then you choose the patty. There are three beef options. Ground chuck is included in the price of the burger. For $2 more you can upgrade to Angus beef. Tack on a whopping $6 and you get wagyu beef, which the menu erroneously bills as Japanese Kobe beef. (Kobe beef is indeed expensive, and Japanese — so Japanese, in fact, that the nation refuses to export it. Wagyu, an umbrella term that essentially covers all Japanese cattle, is commonly used as a synonym for Kobe. Many U.S. ranchers now tend so-called wagyu herds; the meat is tasty to be sure, and pricey — but not $6-a-burger pricey. For the complete lowdown on America's love affair with Japanese cows, I recommend Forbes food writer Larry Olmsted's "Food's Biggest Scam," available on an Internet near you.)

At any rate, ground chuck or Angus are your best bets. Freshly pattied, both provide a fat and juicy burger. What's more, the burgers here are so overloaded with toppings that any subtle flavor tweak brought on by super-premium beef would go unnoticed. The "Guacamole B.J." with bacon, cheese and a generous "dollop" of guac is actually a restrained example. The "Barbra-Q Bacon Cheeseburger" smothers its patty with bacon, cheddar and jack cheeses, a sweet, lightly spicy barbecue sauce, lettuce, pickles and fried onion rings.

For the base rate, you can also choose a ground-turkey patty, a grilled chicken breast or a vegetarian black-bean patty; a hunk of seared ahi tuna adds $5 to your tab. There is also a "Brat Patty," which is exactly what it sounds like: bratwurst sausage meat rounded into patty form. The menu features this in the "Ballpark Burger," topped with Swiss cheese, a heap of sauerkraut and a swipe of spicy mustard. I liked the bratwurst, but it battled mightily with the flavor of an abundant supply of kraut. If you so desire, you can pay $1 to sub the brat patty into the burger of your choice.

Finally, you choose a side from a list of crowd pleasers. The standard fries are good, thick and crisp, as are the onion rings. The sweet-potato fries taste like every other sweet-potato fry in town. There's a side called "Tasty Ta-Tas" (Tater Tots), but I'm a happily married man. As with the sides, the starters don't veer far from the chain bar-and-grill template. Plump, lightly chewy soft pretzels are a standout, the dip of melted jack cheese and jalapeños that accompanies them a guilty pleasure. There is a local nod: an order of T-ravs with marinara sauce and the same cheese dip on the side. These are pleasant enough as a snack, although as with the sweet-potato fries, their food-service provenance is unmistakable.

The sandwiches are nearly as overstuffed as the burgers. The "Bird Cage of Paradise" features slices of warm roasted turkey topped with lettuce, tomato, bacon, avocado, melted cheddar and mayonnaise spiked with herbs. It's a mess to eat, but tasty. At the very bottom of the menu, almost an afterthought, are five entrées borrowed from 2003: a strip steak; ahi tuna with wasabi mashed potatoes; fried chicken "tenders"; balsamic chicken breasts; and lobster mac & cheese. I tried the lobster dish, a rich soup of melted cheese bobbing with penne and stray bits of lobster meat.

The concoctions on the drinks list make for an amusing read even if you don't end up ordering one. Exhibit A: the "Fuzzy Tea Bag." I didn't order it, but I laughed. Really, you can't help but have a good time at Mary's, even if you find yourself taken in by the décor before even glancing at the menu.

Or to quote a certain song that's now stuck in my head: "Strike a pose. There's nothing to it."