Where the Locals Eat, or Why I Should Write My Own Damn Book

So my colleagues over at Night & Day received a new book from Magellan Press, Where the Locals Eat: The 100 Best Restaurants in the Top 50 Cities. 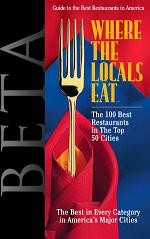 Each city has a list of a dozen or so best-of-the-best restaurants, with brief descriptions. After that, there's a longer list of restaurant names and phone numbers to round out the total of 100. The book's Web site has more information for all 100 restaurants for each city.

At any rate, here are the guide's bonafides, from the introduction:

At Where the Locals Eat, we've assembled a hardy band of certified foodies -- passionate gourmands to near-omnivores -- who eat out a lot and know the difference between a restaurant special and a special restaurant. They're adventuresome in their grazing, and they don't mind trekking across town in search of the new and the different.

OK, so I grant the overall list of 100 St. Louis restaurants includes many of the restaurants that I'd single out as among our best: An American Place, Atlas, Harvest, Niche, Terrene. (Restaurants that have opened since late 2006 seem to be excluded, so no Acero or Franco; and a few closed spots, like Red Moon -- but, oddly, not King Louie's -- are included.) It also includes some stinkers, albeit expected stinkers: Imo's Pizza being the obvious example.

But I take serious issue with the whole "adventuresome in their grazing" spiel. The King & I, Pho Grand and Arcelia's -- their individual merits notwithstanding -- are "adventuresome"? Hell, you can walk from King & I to Pho Grand.

What about La Vallesana? Simply Thai? Pho Long? Señor Pique? Do most St. Louisans know about these places? Well, no, but that's your freakin' job, isn't it? To research the best restaurants in a city, not confirm the conventional wisdom.