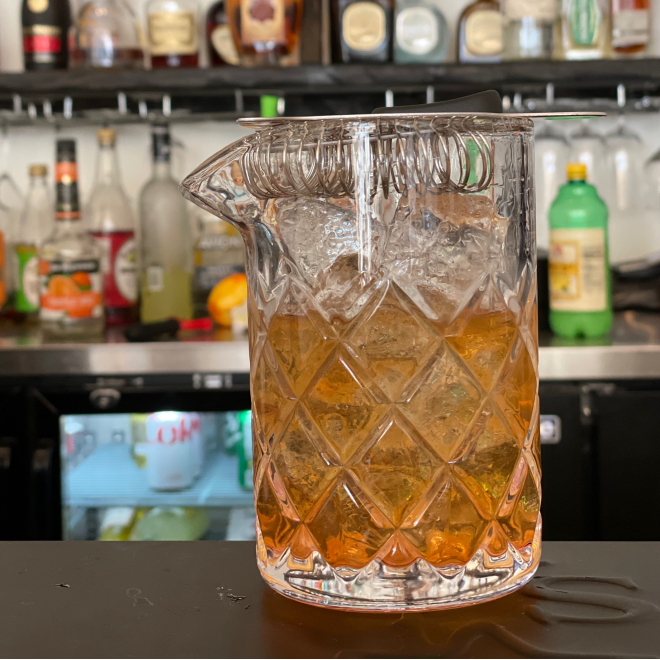 COMPLIMENTS OF WHISKY ON WASHINGTON
Whisky on Washington is a celebration of all things whisky.

Whisky lovers have a new spot for enjoying their favorite beverage, courtesy of one of the spirit's most ardent fans. Whisky on Washington (1321 Washington Avenue), a new bar from local bourbon enthusiast David Shanks, opened last month in the heart of Washington Avenue's entertainment district, promising a unique tasting and lounge experience to St. Louis bar-goers.

According to Shanks, Whisky on Washington is designed for whisky enthusiasts of all levels — from the inexperienced imbiber looking for guidance from the knowledgeable bartenders to the connoisseur eager to enjoy a favorite label. With the bar, Shanks is hoping to share his passion for the spirit while bringing something unique to the Washington Avenue district — a dream that has been in the works every since he first got into whisky while on a trip the Kentucky's Bourbon Trail.

"This really just came from a love of whisky," Shanks says. "I was not originally a whisky drinker — more of a tequila guy — until I took a trip down the Kentucky Bourbon Trail and really fell in love with the science behind it. How it's done, how it's aged from start to finish, how to drink it, what the proof means — just everything that goes into a good whisky. It has such a rich history, and once you understand that, you really try to learn and conquer it, even though that's not possible."

Shanks, a St. Louis native, never envisioned himself going into the bar business. With a background in education, he assumed that would be his path until he realized just how important to him it was to share his passion for the spirit with others. About three years ago, he decided to go all-in on opening what would become Whisky on Washington, searching several neighborhoods in St. Louis City for the right spot. Once he located the former shoe store on Washington Avenue, he knew he found where he was supposed to be, and after sketching out what he wanted the lounge to look like, he got to work on the buildout.

That should have taken about a year, but the pandemic and other surprises that came up during the renovation of the old building delayed his plans. Finally, this July, he was able to open his doors to the public.

"Whatever came up definitely did, but it was a blessing in disguise," Shanks says. "No one wants to be stuck opening a business at the start of a pandemic."

Now, Shanks feels the time is right to offer the full Whisky on Washington experience to his guests, and is eager to provide a warm, welcoming space for people to learn about and enjoy everything from pours of their favorite labels to thoughtful cocktails. He's proud of the bottle list he's curated and some of the specialty, whisky-centric drinks his bar staff has created, including what he describes as the ''best Old Fashioned in town," as well as a "Wow-Mo-Politan," which is a whisky-based version of a Comsopolitan.

Though he is not offering food, Shanks encourages guests to bring in or have delivered food from area establishments. He is particularly excited to have his customers patronized neighboring businesses, such as Blondie's, 4 AM Kitchen, Rosalita's, Pop's and the soon-to-open Harold's Shrimp & Chicken, because they have been so welcoming to him.

As for his bottle list, Shanks is proud of what he's put together, but he admits that it is never enough for the hardcore bourbon enthusiast. To those who may be looking for more, Shanks invites them to tell him their favorite labels so that he can make sure he builds the most complete whisky bar in the area.

"We have a rule that if we don't have it the first time you're here, we will have it when you come back," Shanks says. "We have an ongoing list of whiskys, and we can typically get anything in within a day or two; we just send a picture of what they are looking for to our distributors to see who can get it. I'd say half of our collection comes from customer requests. It's a fun thing because every whisky drinker is an expert. We just want to get out of their way and let them run it."