Why Is This Cooking for Your Cat Different From All Other Nights?

A colleague alerted me to an article in yesterday's New York Times about how the Jewish American Princesses (and Princes) of pets are enjoying premium canned food that has been certified as kosher for Passover.

Some lucky dogs also get to go to their own Passover seder, led by an actual rabbi, and play with special holiday-themed "Chewish toys." (Full disclosure: I bought a Chewish toy once for my mother to display on our seder table. It was a frog. We named it Pinchas. One seder guest declared it the cutest plague ever.)

The article, however, did not mention cats at all. With good reason, I guess. The holiday of Passover must be a frought occasion for cats who live in Jewish homes. They, after all, were worshipped as gods by the Egyptians. Why the hell would they have wanted to participate in any Exodus?

I consulted Bess, my own little princess.

Bess has never been to a Passover seder. No one has ever invited her to one. I'm not sure how much she would like it anyway, since she despises crowds and singing. (Well, my singing.) The only thing she might like is the gefilte fish, but most definitely not the horseradish garnish.

Anyway, when I asked her how she felt about celebrating Passover, she turned around and started licking her butt. That seemed like enough of an answer, but I figured that if I was stuck eating matzo for eight days, she should have to suffer, too.

It turns out that Evanger's, the Wheeling, Illinois-based company that manufactures the kosher dog food, also makes kosher cat food. I set out on an epic quest through the rain (naturally) to find a can or two or three for my little darling.

There's no need to go into the specifics of the quest -- it was too aggrevating for me to want to recall in much detail, except for the yuppie couple in Clayton who fussed endlessly over a car seat for their dog, Biscuit -- but if you are interested in procuring kosher food for your cat, you can benefit from my mistakes and go directly to Pets in the City in Soulard. 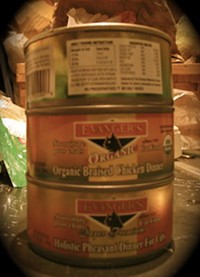 photo by Aimee Levitt
I arrived home with the Organic Braised Chicken Dinner, Beef Tips With Gravy and Holistic Pheasant Dinner For Cats. You can't really tell from this photo, but all three cans have a citation that reads, "Endorsed by The Chicago Rabbinical Council. Kosher for animal consumption on Passover."

(Note: I'm not exactly sure what component of cat food would make it un-kosher for Passover, but kosher laws are so complicated that not even rabbis agree on them, so we'll just agree to agree with The Chicago Rabbinical Council. But just to be safe, I served Bess a little piece of matzo on the side.)

Last night was Seder Number Two in many households, but not ours. I'd had enough sedering the first night, where I found myself at Ground Zero for wine spillage. Instead, we observed in our own way: I offered Bess a choice between the three cans. She sniffed at them all and seemed torn between the beef and the chicken, but finally went for the latter. 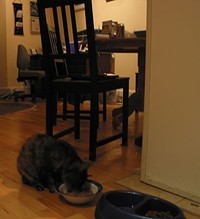 photo by Aimee Levitt
I spooned it into a bowl. She fell upon it like the adorable little predator she is. Quite honestly, I have never seen her enjoy any kind of food this much. She ate for about ten straight minutes. Then she took a break. Now, as I write this, she is back at her bowl, and it has been quite a while since she has come up for air. (To her credit, she took a nibble of the matzo, too.)

If I was dubious about this food's kosher-ness for Passover, Bess' reaction dispelled all my doubts: Anything that tastes this good cannot possibly be authentic Passover cuisine.