Winter Flavor 2016: Recipes That Will Warm Your Belly — and Your Soul 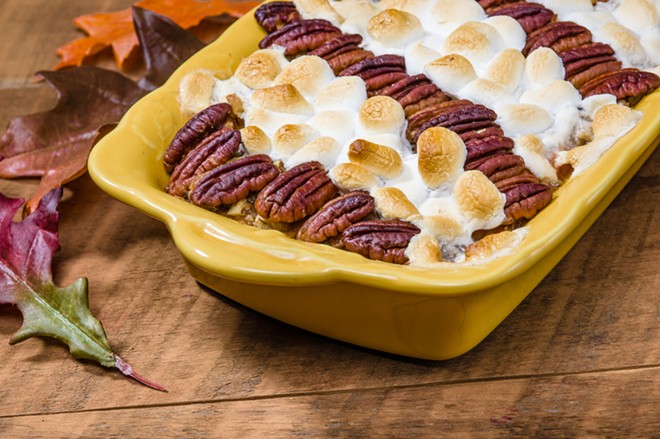 This year's Winter Flavor special issue is now on the streets of St. Louis. To get recipes from two dozen top St. Louis chefs, please look for your copy wherever the RFT is available. We'll also be sharing a few selected recipes online in coming days, including one from our cover girl Natasha Kwan of Frida's.

When we asked two dozen St. Louis tastemakers for recipes that evoked warmth, we expected the usual suspects: a stew here, and mulled wine there, maybe some soup. And we got those.

What we didn’t expect, however, were the reasons behind the recipes, reasons that had little to do with the temperature of the dishes. Instead, these chefs, bartenders and restaurateurs tell stories of a warmth that goes beyond a feeling on the palette — whether it’s the memory of a beloved relative or the first dish cooked for a spouse, they speak of an unquantifiable feeling that goes much deeper than what’s on the plate. 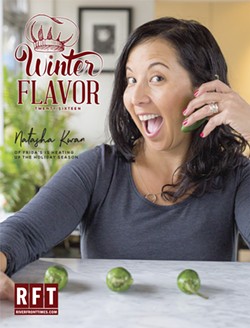 My own contribution has such an arc. Five years ago, I awoke the day before Thanksgiving in the same way I had every morning for the past three weeks: freezing cold and depressed. I’d moved to Washington, D.C., to take an awful job pushing paperwork in the bowels of a drab federal building, leaving behind family, friends and the man I would later marry. Some acquaintances had been kind enough to let me crash on an air mattress in their drafty apartment in the northern Virginia exurbs — a nice gesture, save the lack of blankets and the hour and a half commute to and from the city, which made seeing the sun a novelty.

When I started the gig, I had assumed that the day after Thanksgiving would be a holiday — as an outsider, it seemed like the federal government was closing every other day. Of course I’d be home for the holidays. My boss dashed my hopes when she informed me that not only was Friday a work day, but I didn’t have time accrued to take a vacation day. I would be spending the holiday alone.

On my way back to the frigid apartment that evening, shivering at the commuter bus stop, I determined that if I had to spend Thanksgiving by myself, I would eat the most indulgent thing I could imagine. I stopped at the grocery store and bought all of the provisions required for candied sweet potato casserole, a riff on the one served at the steakhouse I used to work. Armed with the ingredients plus a bottle of port, I headed home and drifted off to sleep, dreaming of the next day’s decadence.

The next morning, I fired up the oven and roasted off the potatoes — which had the added benefit of making the apartment warmer. I mixed them with butter and vanilla and topped them with a pecan concoction so sweet, it makes my teeth hurt thinking about it. The entire place smelled like warm pecan pie.

A few minutes after I pulled the dish out of the oven, my housemates arrived home, commented on the mouthwatering aroma and invited me to join them at their family’s house for dinner that evening. In retrospect it’s possible they just pitied me, but I’m still convinced the reason I spent that Thanksgiving around a table with new friends was because they wanted some of that casserole for themselves.

As you read through this year’s selections, you’ll notice that, behind the ingredients lists and methods, many dishes have a similar backstory. Perhaps you’ll be inspired to make one or two. And when you do, be sure to share the results with someone special. After all, no matter how delicious food is, it tastes much better shared around a table with those you love.

Combine sweet potatoes, sugar, salt, vanilla, eggs and butter in a large mixing bowl in the order listed. Beat thoroughly with a hand mixer to increase the fluffiness. Pour mixture into buttered baking dish. Bake for 30 minutes at 350 degrees. (At this point, dish can be covered and refrigerated.)

Sprinkle the surface of the sweet potato mixture evenly with the crust mixture and return to oven for 10 minutes. Allow to set at least 30 minutes before serving.