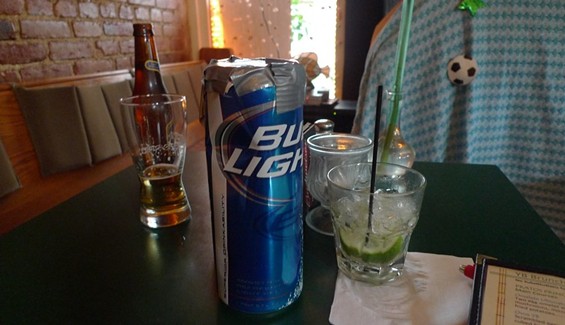 photos by Keegan Hamilton
A shaker made from Bud Light can and a caipirinha: two essential ingredients for Brazilian soccer.
The caipirinha, a blend of lime, sugar and cachaça (fermented sugar cane), is the national cocktail of Brazil. At Yemanja Brasil in Benton Park, it's served in lowball glass with big hunks of muddled limes floating in the bottom, making the liquid appear opaquely green, almost the color of chartreuse.

In addition to being delicious, the drink serves as a nice symbol of Brazilian soccer and soccer culture.

Both the beverage and the national team, for instance, are wonderfully pleasing to the palate. The cachaça liquor is mouth-puckeringly saccharine in it's own right but, when blended with copious amounts of raw sugar, it takes on entirely new level of syrupy deliciousness. The Brazilian footballers, meanwhile, are sweet with the ball -- pirouetting, instantly changing directions and effortlessly flicking no-look heel passes to each other.

The two entities are also incredibly potent. It's just booze, sweetener and lime juice in the cocktail, while the Esquadrão de Ouro is a well-oiled, goal-scoring machine. 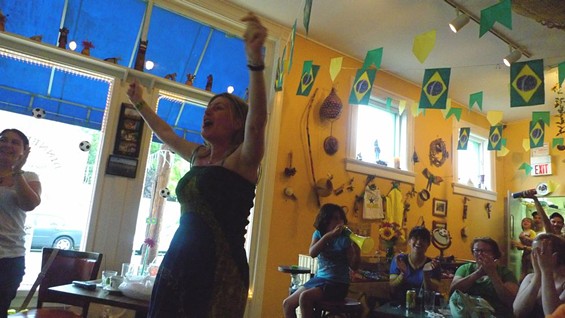 The little girl in the background needs a proper vuvuzela to blow after Brazil goals
With caipirinhas, Palma Louca beer and lunch menu that features dishes like lombo ilpanema - pork steak with a pineapple and onion sauté -- Benton Park's Yemanja Brasil was a soccer fiend's dream yesterday afternoon.

The wait staff was decked out in Brazil soccer gear and chattering in Portuguese with guests and their children. Each table came equipped with a homemade shaker fashioned from an empty Bud Light can filled with rice and duct-taped at the top.

The Brazilian national team did not disappoint. North Korea put up a decent fight in the first half but the guys in the bright yellow jerseys kept their cool and kept attacking the goal, finally scoring in the 55th minute of the match. It was a gorgeous goal from Maicon, who charged up the right side and struck the ball with a leaping kick, sending it past the Korean keeper at a seemingly impossible angle and into the side of the net.

The restaurant crowd, of course, went wild with all manner of horns, drums and shakers. One American woman wrapped her hands around her baby's ears to protect against the din.

While this was happening, the Brazilian kids were blowing on horns and screaming at the top of their lungs
Brazil scored again on a perfectly-timed pass from the incomparable Robinho to Elano and North Korea netted a fine goal of their own in the 89th minute on a counterattack by Ji Yun Nam.

Almost as soon as the final buzzer sounded, a waitresses wearing a Brazilian flag patterned dress hit the mute button the TV remote and changed the soundtrack to celebratory samba music. She raised her arms and shook her hips but no one joined in the victory dance. Perhaps not enough caipirinhas had been served after all.