Three people -- none of them Serbian -- showed up to watch.

"I used to play in a league in Tower Grove Park," he said to the young American men sipping coffee and Budweiser while seated elbow-to-elbow at the small bar. "You talk about people from all over the face of the Earth, they came from everywhere."

"We had this German guy," Korac continued. "He'd always call everyone 'Schweinhund -- You fuckin' schweinhund' -- until finally someone asked what it means. He says 'I'm calling you a pig's ass.' So we're like 'Hey, fuck you too buddy.' But we couldn't tease him too much 'cause he was the one who always brought the beer."

Korac is short and barrel-chested and he wears several gold chains around his neck and a sweat-stained bandana on his head. He bends slightly backward when he laughs and the sound comes out like a muffled baritone roar.

Asked if the kitchen had a special for the morning, Korac replied "double cheeseburger" like it was the most appetizing food in the world for 6:45 a.m.

One of the stubble-faced twenty-somethings at the bar turned and said softly, "Why do I feel like he's the kind of guy who could put down a cheeseburger and a beer right now no problem?" 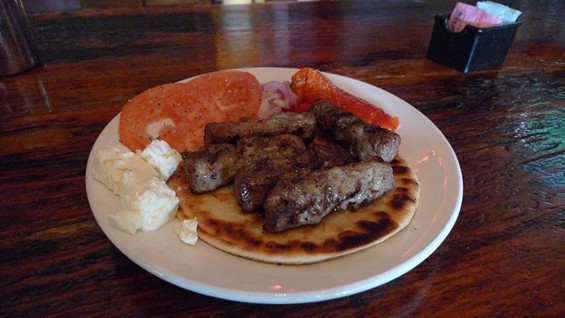 Cevacici: Serbia's finest schnitzel
The menu breaks it down phonetically like "che-vap-chee-chee" but Korac explained that everyone either calls them "che-vaps" or "chee-chees." Whatever you call them, they were a stomach-settling combo of grease, oil, and cheese.

The Americans said they were there bright and early because they were "on a mission to watch as many games as possible with fans from different countries...and we hate Germany"

In Korac's estimation, there are about 300 Serbian families living in St. Louis. Most of them live and attend church on a two-block stretch south of I-44 near Randall's Wine and Spirits that's actually called "Serbian Drive." It's a shame none showed up to watch the match (Korac: "They're all at work right now.") because they pulled off a serious upset against Germany.

They got a lot of help from officials early-on when Germany's Miroslav Klose was ejected after drawing his second yellow card. The Serbs scored almost immediately afterward.Germany had a penalty kick in the 60th minute stopped by the Serbian keeper.

Until then, Korac had cursed the goalie up and down. Breathing a sigh of relief, he said, "God must really love the Serbs today."