You Can Eat Scott Davis' Delectable Burgers at Gezellig on Fridays 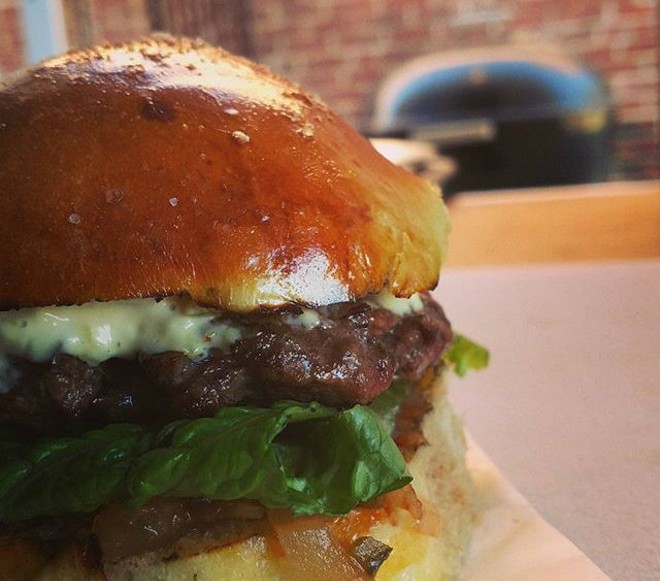 When he was chef de cuisine at Three Flags Tavern, Scott Davis spent his days and nights preparing exquisite plates of olive oil-poached octopus and heirloom pork. However, if you ask anyone what they miss most about the now-shuttered restaurant, the answer is resounding: the burger.

Now, burger aficionados again have reason to celebrate. The chef, together with friends Nate Emmons and Rob Varner, has launched a Fridays-only concept at the Grove tap house and bottle shop Gezellig (4191 Manchester Avenue, 314-833-5532).

The two-month-old venture, called Swell the Tide at Gezellig: Burger Town USA, started out as a simple conversation amongst friends. Gezellig owner Brandon Cavanagh would regularly stop into Rise Coffee House, a Grove mainstay across the street from his tap house. There, he got to know Rise's Davis, as well as Emmons and Varner, and the four got to talking about Gezellig's food program.

"Rob wants to put a kitchen into the space, but he's just not ready to do that yet," explains Davis. "In the mean time, Nate and I offered to do a Friday burger with them. He was totally on board with the idea and is giving us the space to do it."

Burger Town USA is an every-Friday event, beginning at 6 p.m. and running until they sell the last burger. The concept operates out of the vacant storefront adjacent to Gezellig, nicknamed "the Garage," with a menu consisting of the signature "American Standard" burger, as well as two to four other rotating burger offerings. Guests order at a counter and either hang out in "the Garage," take their food with them to go, or head over to Gezellig, armed with a delicious way to soak up the tap house's impressive offerings.

Davis recently announced that he will be moving into a consulting role with Rise as he takes on a new position as executive chef at Cafe Osage. However, he does not anticipate his other projects interfering with Burger Town USA .

"We're going to keep this going for as long as well can," Davis says.