You know what they say about restaurants: Small plate, small wine list 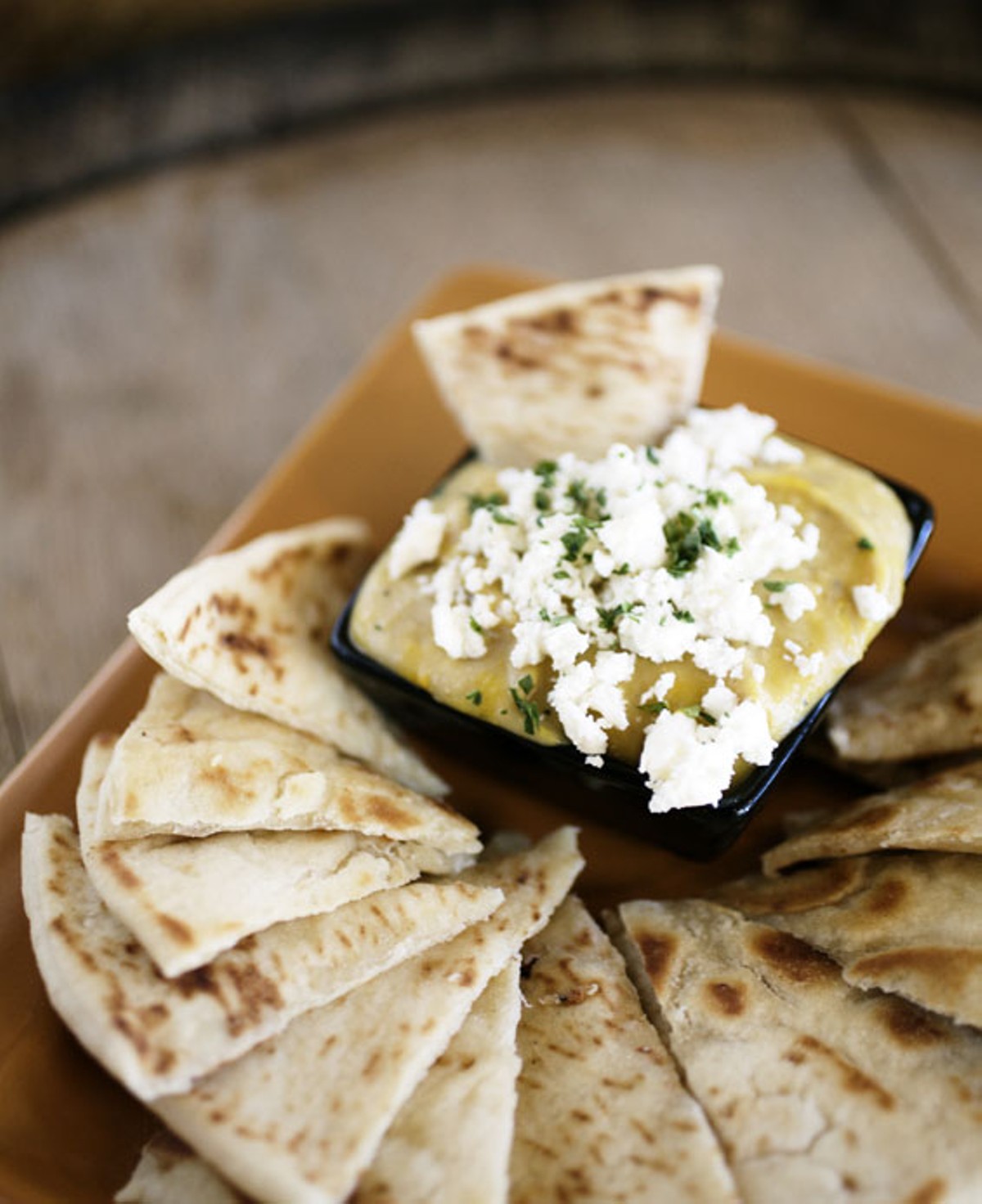 As its name makes clear, One 19 North Tapas & Wine Bar covers two of St. Louis' favorite restaurant trends. The menu is composed of small plates both cold and hot, with enough Spanish influence that you might call it tapas without the quotation marks. Both the menu and the wine list are tucked inside cork (or faux cork) frames, and the décor includes wine barrels.

Naturally, then, I begin this review with the patty melt.

This is no miniaturized patty melt. This is a sandwich you must eat with both hands. In fact, the patty melt isn't available on the tapas menu, only on the (mostly tapas-free) lunch menu. Served on marble rye bread, the burger itself looks to be a hand-formed, plumper in the middle than around its edges, and it's smothered with melted Swiss cheese, grilled onions and sautéed mushrooms. I ordered mine medium and was thrilled to find it even closer to medium-rare, pink shading to red and very juicy.

This lunch was my first visit to One 19 North, which opened in June along the main stretch of "downtown" Kirkwood. The restaurant is essentially a single room, two or three times longer than it is wide, with the bar stretching along one wall. The look is Generic Rustic, with stone the dominant feature, evoking either an Old World wine tavern or Olive Garden, depending on your disposition.

While the patty melt didn't give me any sense of what the restaurant's tapas dishes might be like, it suggested a seriousness of intent in the kitchen. Chef Christopher Delgado (a veteran of Jimmy's on the Park and the St. Louis Club) and his staff clearly care about details. Medium didn't mean medium well. While it might have been more efficient either to grill or to sauté both the onions and the mushrooms, it made for a better dish to give each a separate treatment.

This level of attention carries over to the small plates on the dinner menu. The carnitas is a standout because it walks right up to the precipice of being burnt — and then leaps onto your plate. The dish brings several hunks of pork shoulder that have been simmered until they seem to quiver with rendered fat. These are then seared until the exterior is as crisp as a potato chip. Mere seconds longer and it would have been a briquette. Instead you can enjoy the pork's rich flavor, amped up by a garlicky, citric marinade and a bright chimichurri sauce.

Likewise, an order of lamb chops brought four specimens that, in spite of their relatively small size, had been impeccably grilled. Each chop bore strong cross-hatching and was a beautiful twilight-purple medium-rare. The grilling technique is even more impressive considering how small that grill is. (No surprise given the walk-in-closet-size kitchen.) A cucumber-yogurt sauce garnished with fresh mint leaves provided a light, cooling accompaniment to the lamb.

Crawfish étouffée shows off a judicious use of spices. First you taste the rich brown roux, enriched with cream, and the buttery, sweet crawfish. Only gradually does the peppery heat build, and even then it never swamps the other flavors. Though the "sweet and spicy" mango sauce served alongside an order of fried calamari is hotter, it too is calibrated to complement both the mild sweetness of the chopped mangoes and accent the citrus-spiked squid.

OK, yes, these dishes are more "tapas" than tapas. The menu does betray some Spanish — or, not to tread on any nationalist toes, Iberian — influence, however. A wedge of fried Manchego cheese is served alongside a piquant Spanish sofrito sauce for dipping, while a small amount of Manchego is melted over grilled asparagus, which sits in a pool of brightly flavored, lightly nutty romesco sauce, a mainstay of Catalonian cuisine.

In the end, though, the tapas/"tapas" issue is moot. Whether because of the variety or the sour economy or, most likely, a combination of both, St. Louis is in love with small-plates menus, and One 19 North knows the formula for success: straightforward dishes of meat and seafood dressed with strongly flavored, mildly spicy sauces. If this formula doesn't allow for much creativity or "Oh, wow!" moments, it also minimizes the opportunities for failures, especially considering Delgado and his crew's skill and attention to detail.

While the kitchen seems already to have found its comfort zone, the wine-bar half of One 19 North Tapas & Wine Bar needs some work. The list is brief, which isn't necessarily a flaw, and no bottle is priced above $40, which is welcome, yet the selection is lacking. I don't mean in quality, necessarily. I haven't sampled every wine on this list. Yet I have sampled several of them because they are readily available in area supermarkets. There is a good chance you know the names: Castle Rock pinot noir, Penfolds shiraz, Chateau St. Jean merlot.

At best these wines are perfectly adequate everyday go-to's for the budget-conscious tippler. Which means that paying, say, $23 for a bottle of that Penfolds shiraz at a wine bar — to say nothing of $10.75 for a glass of that Castle Rock pinot! — doesn't make for much of a value. Beyond that, it simply isn't interesting.

There are wine bars in St. Louis — not many of them, granted, but they do exist — where the owner or manager or sommelier makes a concerted effort to find wines that are, first and foremost, delicious, but also different from the same brands that everyone else (and their distributors) peddles and, crucially, reasonably priced. Not that One 19 North has to scrap the entire wine list and start over, but when your kitchen is willing to push the small-plates format beyond the tried-and-true, why shouldn't your bar make the same effort?