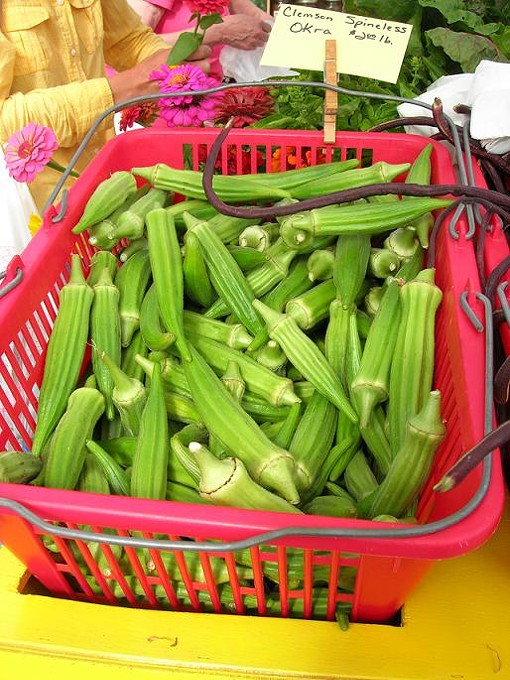 Okra is one of the most beautiful plants in a summer garden. Its flowers make it look like an exotic plant imported from a gorgeous tropical isle where the summers are mild and the humidity is bearable -- kind of like St. Louis this summer. Red okra is so pretty that I've even seen it used for landscaping.

Unfortunately, okra is also a much-maligned Southern food item, to the point where most people can't conceive of it as anything other than fried. Its problem is obvious: the slime. It's like Ghostbusters all up on your cutting board. And while the 12-year-old science-fair participant in me wants to think up alternative uses as an industrial lubricant, it doesn't make for the tastiest eating. The flavor is bland, to be kind. It's so bland that I totally abandoned trying to write up the quick gumbo I made this week, because I couldn't figure out how to save it from its flavor vacuum.

Enter the eco-chef. There is a lot to love about Bryant Terry. He's a food activist living in Oakland, California, working at the intersection between poverty, racism and nutrition. He advocates for urban renewal through food justice and sustainability, and he does it in a way that is hip and engaging without coming off like Poochie the dog.

It also doesn't hurt that he is way handsome and has good taste in music. His cookbook, Vegan Soul Kitchen, does a great service in the world of vegan cookbooks. He never tries to recreate standards -- he would rather reimagine classic soul-food ingredients from a fresh perspective. Think sweet potatoes and watermelon and collards in a totally different context. It's the kind of cooking that doesn't beg for the "vegan" prefix, that doesn't alienate the audience that he is trying to reach through his activism, and helps to win people's hearts through their stomachs.

Terry is realistic about okra and its challenges, so he goes for one of my favorite ways to save otherwise boring vegetables: the char. Grilling and roasting is so great because it caramelizes all of the available sugars, and gives everything an automatically more complex flavor. I'm a big fan of roasting okra (lots of oil, relatively generous salt, 400 degrees for around 30 minutes), but I'd never thought of grilling it. But since okra is usually available at the very hottest time of the year and I hate using the oven in August, it absolutely makes sense. Plus this is yet another way of using up all of those tomatoes your coworkers keep pushing on you.

Speaking of Farmers' Markets & Grocery Stores, In The Kitchen