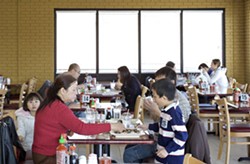 Several readers contacted me over the long weekend with news that Mama Pho Vietnamese Restaurant at the intersection of South Grand Boulevard and Chippewa Street might have shut its doors.

I haven't had a chance to visit Mama Pho yet today, but according to a reader's email, a sign stating the owners are "on vacation" has been posted on its front door since Halloween. Now, that same reader informs me, there is a "for lease" sign in the window.

The restaurant opened in November of last year, which suggests its closure could be tied to the expiration of its lease.

A call to to Mama Pho's listed phone number rang several times before connecting to a recorded message asking the caller to input an access code. More as I learn it.