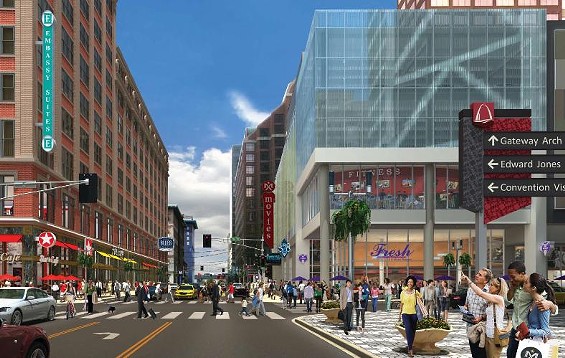 The ever-expanding Pi pizza empire -- I think it's safe to call it an empire at this point, no? -- will open its fifth location at the new Mercantile Exchange development downtown, the restaurant and the project's developers announced this morning.

The new Pi joins the original in the East Loop and its sequels in Kirkwood, the Central West End and Chesterfield as well as its food truck, Pi on the Spot as well as its new Washington, D.C., location and food truck.

The Mercantile Exchange is a retail, residential, arts, culture and entertainment complex comprising the former St. Louis Centre and Dillard's buildings -- now the Mercantile Exchange and the Laurel Buildings, respectively -- as well as a hotel and the remodeled Macy's. The project, including Pi, is slated to debut in early 2012.

"We really like the Mercantile Exchange for several reasons, including the developer and his vision for locally-owned operators, as opposed to Ballpark Village. The neighboring Edward Jones Dome and Convention Center will surely drive business, but most exciting is the possibility to be across the street from the Blues Heritage Museum, which I feel may be the biggest thing to happen to St. Louis and Downtown in years.

"Furthermore, proximity to the City+Arch+River renewal is very important, as we hope our guests will be spending more time closer to the river.

"Finally, we feel being as close to the highest density of downtown offices gives us an advantage in that potential guests can walk from their offices, leaving their cars behind."

Those who have visited Pi's multiple locations know that they aren't mere clones of the original Delmar Loop restaurant. The Kirkwood spot features a milkshake bar, for example, while the Central West End version offers a coffee bar and a more urbane atmosphere. What can we expect from the new Pi?

"We're still working through details on differentiated menu offerings, but we certainly will give our existing guests to the west reason to make the trip downtown," Sommers says. "We're very excited about another challenge to design a unique restaurant that still feels like Pi. The cavernous space is new for us but feel like we can make it our own.

"The patio will also be a big story at this location, seating over 80 on both Washington Avenue (raised and offstreet) and 6th Street. We will also include a private room, which we lack at most of our existing restaurants."

For those of you (including Gut Check) who might have wondered whether another Pi would start cutting into the other locations' business, Sommers has anticipated your question:

"Most downtown residents choose to live there because of the density and proximity and the ability to walk to restaurants and bars. For this reason, plus the out-of-town guests occupying the 7,500 hotel rooms, we don't feel this location will negatively affect our existing restaurants."