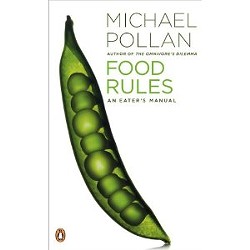 Here at Gut Check, we've had our share of fun mocking Michael Pollan's food rules. However, longtime readers of this blog know that I, personally, am a big fan of The Omnivore's Dilemma and In Defense of Food: An Eater's Manifesto.

That said, I must admit I cringed when I saw the three new food rules that Pollan will include in the next edition of his book Food Rules.

Now, Pollan didn't write these rules. He chose them from among the more than 4,000 submitted through Slow Food USA.

Which means -- shudder -- that there were at least 3,997 possible food rules even lamer than these three:


- Place a bouquet on the table and everything will taste twice as good.

- Love your spices. They add richness and depth to food without salt.

- When you eat real food, you don't need rules.

Really, Mr. Pollan? This is the best you could do?

Let's take them one by one:

Place a bouquet on the table and everything will taste twice as good.

This reads like advice from Redbook. It has nothing to do with the sort of "real food" that Pollan triumphs. Does an HFCS-laden soda and a Big Mac taste twice as good if eaten on a table with a bouquet?

What's funny is that in the post on the Slow Food USA in which he announces the winners, Pollan notes that he disqualified other potential rules that he otherwise liked because they were "less useful or scientifically verifiable than entertaining."

I look forward to reading the peer-reviewed study about the quantifiable impact of the presence of flower bouquets on the flavor of food.

Love your spices. They add richness and depth to food without salt.

This is probably the least lame of the three, if only because it' so obvious. Why, yes, spices do add richness and depth to food without salt -- with salt, too. In fact, learning to cook means learning how to calibrate spices and salt for maximum effect.

What irks me about this rule is the touchy-feel "love your spices" part. Michael Pollan made his mark by making rigorous attacks on agribusiness, food firms and our terrible eating habits, not by encouraging circle jerks and group hugs.

Instead of "Love your spices," how about "Learn more about the history and use of your spices than what's written in the Penzey's catalog"?

When you eat real food, you don't need rules.

Jesus Christ, this sounds like the tagline to The Omnivore's Dilemma: The Motion Picture, as directed by Michael Bay.

Seriously, though, while I generally don't subscribe to the backlash against Pollan, this "rule" smacks of condescension. It doesn't invalidate Pollan's larger aims, but it goes a long way to explaining why his work sometimes sends sensible folks running screaming for their Wonder Bread and Twinkies.