Over a decade ago, the last remaining Dunkin' Donuts in the area closed down, leaving a giant donut-shaped hole in St. Louis' donut-hole-loving soul. Still with us? All faith was restored in March of 2010 when the east-coast branded donuts returned to St. Louis with a location in Kirkwood. Eager fans watched the building of the modern Dunkin' Donuts closely through Gut Check, awaiting the day they'd taste its famous Munchkin donut holes once again.

Since then, another branch opened in October of 2010 in Rock Hill, as well as two locations inside Lambert St. Louis Airport in April and July of the same year. Dunkin' Donuts continues to sweep the city as multiple franchises slowly pop up around town.

The next location for Dunkin' Donuts is led by Dunkin' Brands franchisee Jay Patel, a resident of St. Louis since 1991. Patel has owned and operated a DD in Washington, Missouri, since December 2010 and started the building of another location this month at 8471A North Lindbergh Boulevard in Florissant. The Florissant business is projected to open by mid-August and will be the first of ten stores he has committed to setting up in north and west counties. 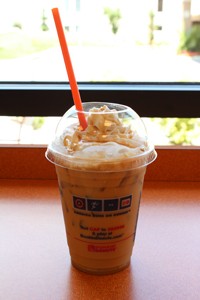 Patel, a real estate developer and retail store operator, says he chose to work with Dunkin' Brands because of its strong brand presence, product line and franchisee support network. Dunkin' Donuts currently has more than 9,000 stores worldwide, spanning some 30 countries and 35 states.

"Dunkin' Donuts has all-day food and beverage products to serve any and all kinds of customer requests," says Patel, happily backing the brand name. "We have a great range of products from a variety of donuts, hot and cold coffee, espresso and tea to breakfast sandwiches, p.m. sandwiches and other delicious bakery items."

"Our summer beverages, including iced lattes, are also very popular.... We're trying to shift our focus from a donut company to a beverage company," adds DeSalvo.