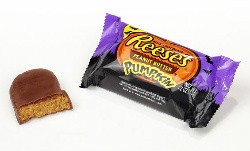 It wasn't all that long ago that Gut Check was donning our finest Disney princess Star Wars character drag outfit and joining the swarms of greedy American children on the hallowed Halloween quest for candy. So we remember well the post-trick-or-treat ritual of sorting the bounty into two piles, i.e., Good Stuff and Crap.

Then we'd head back out and t.p. all the houses where we'd been handed lame candy. We considered the act to be a hint to the clueless to maybe bust out the Snickers next year instead of those execrable homemade popcorn balls. A community service, if you will.

Now we're on the other side of the door, trick-or-treatily speaking, and we're also working from a position of strength when it comes to stamping out Halloween-candy imbecility.

Come on! The gritty peanut butter goes all the way to the edge of the chocolate coating! There's no superfluous ring of ridged chocolate! It's big and over-the-top, a little off-kilter, and everything that makes Halloween candy awesome.

Unless you're allergic to peanuts. If that's the case, Halloween's pretty much mean to the point of tortuous, anyway. 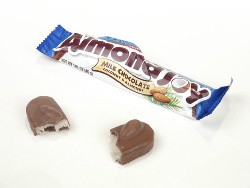 Coconut falls into that category of foods people either adore or hate, right there with olives, mushrooms and hogshead cheese. These borderline foods should be avoided in gifting situations, especially when there are so many other options that aren't potentially offensive and heartbreaking.

Rewind to 1977, and watch the chubby five-year-old in a homemade clown costume sob on a front porch after being given a fun-size Mounds as a Halloween treat.

"Why do they hate me?" the child wonders. Surely a grown-up wouldn't give something so vile as Coppertone-flavored mealy paste to a child, unless that child was a bad person, right?

It's one thing to give a bad treat to a kid who might t.p. your house. It's another entirely to give something so contentious that it has the power to make a child question her worth as a human being.

Couldn't you have just bought the fucking peanut butter cups and left well enough alone? Halloween isn't the time to get all exotic. Save that shit for New Year's Eve, after you've shooed the kiddos off to bed.

Yesterday, Gut Check visited Dierbergs to see if Mounds and Almond Joy are still sold in Hefty-sized bags for Halloween convenience.We haven't paid much attention to them as adults, pretending the awful, flaky gaggers are available only in adult-sized portions, sold from a special counter with other horrible products like cigarettes and Goldschläger. But there they were, little Almond Joys in giant bags. Even worse, Almond Joys coupled with treat-sized packets of Whoppers, tainting perfectly good malted milk balls with coconut stank.

There were no Mounds. Hope for humanity lingers.

Check out the rest of our Best and Worst Halloween Candy Countdown.